[German]Security researchers found again a Bluetooth vulnerability: Smartphones, laptops, IoT devices etc. are vulnerable to a new BIAS Bluetooth attack. This would allow an attacker to access any Bluetooth Classic device without knowing a key. In the meantime, however, firmware updates from various Bluetooth chip manufacturers have been released to close the vulnerabilities.

European security researchers from Oxford, England, have uncovered a new vulnerability in the Bluetooth wireless protocol. An attacker can impersonate a previously connected device without knowing the long-term pairing key, thereby gaining access to any Bluetooth Classic device.

An attacker can pose as a previously bonded device without knowing the long-term pairing key and access any Bluetooth Classic devicehttps://t.co/1YOJlsgrxz pic.twitter.com/KUK5V6LWXC

Flaws within the authentication process

The point of attack are flaws in the authentication process of the classic Bluetooth protocol, which security researchers Daniele Antonioli, Nils Ole Tippenhauer and Kasper Rasmussen exploit. The whole thing takes place when two adjacent Bluetooth devices are first paired. There, a private key is negotiated as a Long-Term Key between the devices. This key is also valid for future connections (the user should not have to pair the Bluetooth devices every time via the intended procedure).

To do this, the attacker must eavesdrop on the first pairing of Bluetooth devices to obtain their parameters, such as device name, Bluetooth addresses, Bluetooth protocol versions and capabilities. The security researchers' video above shows the scheme. Using this data, the foreign Bluetooth device could theoretically be placed under the coupling point. 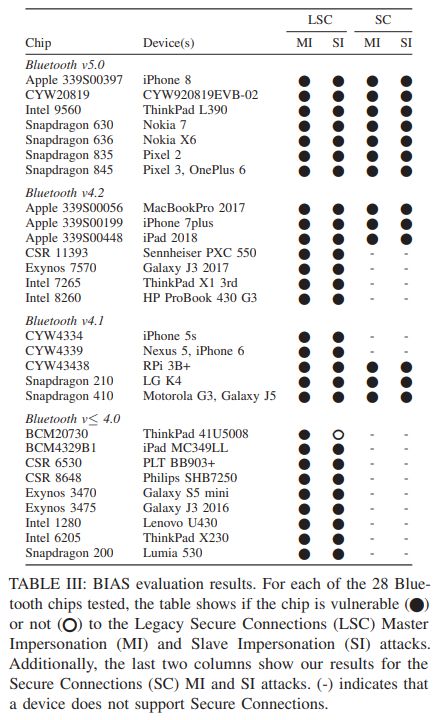 The attack probably works with 28 different Bluetooth chips (from Cypress, Qualcomm, Apple, Intel, Samsung and CSR) that are built into devices from Apple, Lenovo ThinkPad notebooks or pixel smartphones (see the table above that the researchers published in their PDF document). The security researchers have tested 30 different Bluetooth devices from various manufacturers for the vulnerabilities. Bluetooth LE do not seem to be affected.

The problem is that this firmware would have to be installed on the devices as an update. The security researchers are writing: All devices that have not received a security update of the firmware since December 2019 are potentially vulnerable. What is currently not clear to me is how exploitable the two vulnerabilities BIAS (CVE-2020-10135) and KNOB (CVE-2019-9506) are in practice.

Further details can be found on this website of the security researchers. There is also a FAQ which answers user questions. ZDNet also has this article on the topic.

This entry was posted in devices, Security and tagged Bluetooth, Security. Bookmark the permalink.