[German]Users who use DVB receivers (SAT TV) via appropriate TV cards or TV receiver sticks should not upgrade to Windows 10 version 2004. There are probably serious issues with drivers, the Windows Filtering Platform and the digital data streams

I don't use the program DVBViewer by Hackbart any more, but German blog reader Manfred Hüppelshäuser pointed out an entry in the DVBViewer forum in the discussion area, which is about problems with Windows 10 version 2004 in connection with the DVBViewer. But this might also affect other software that is based on the Windows Filtering Platform.

The DVBViewer is a program that allows to capture and store broadcasts in the DVB-T2, DVB-C and DVB-S formats from receiver chips. Years ago I used a DVB-S card under Windows 7 SP1 and bought a license of DVBViewer for it – it is simply one of the best programs in this area.

In German DVBViewer forum there is a thread Wiedergabe gestört nach Windows 10 Update auf 2004, where user FW43412 wrote the following:

Windows 10 x64 update from version 1909 to 2004 results in video with blocks and streaks and the sound stutters. Programmes recorded before the update are played back correctly. Reinstallation was not successful.

DirectX settings all on LAV

Could be an individual case, but another user with the alias maliilam vividly confirms his experiences in this regard:

Yesterday under 1909 it ran without any problems, now with 2004 it is incomprehensible. TV and Dreambox have no problem on the same cable connection. All channels are affected.

There the effects appear even when watching the DVB stream. He then did a rollback to Windows 10 version 1909 and everything was fine again.

User FW43412 then has the properties of the DVBViewer filter, which taps the DVB signals at the receivers 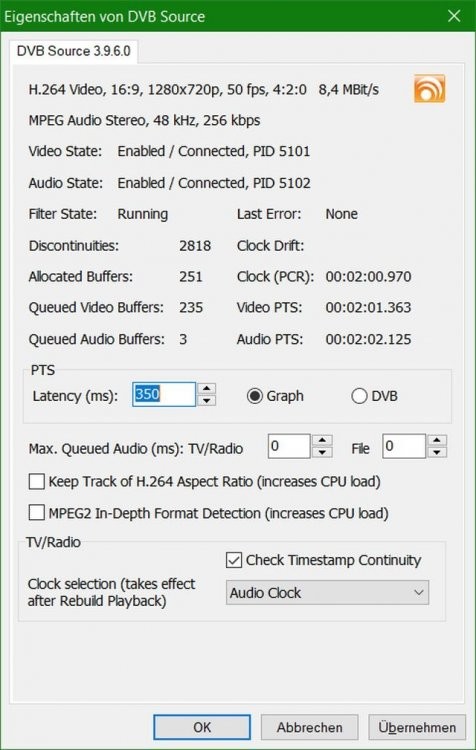 In the graph of the Windows Filtering Platform (see also) there are 'discontinuities' of 2818 which are responsible for these effects. The answer of the forum moderator is therefore:

This is bad ;) The DVBViewer receives a broken stream. It means that probably not the DVBViewer itself is affected, but the drivers of your DVB devices. They lose data.

With every Windows 10 feature update the same problem: Some DVB devices are no longer usable, sometimes the drivers say goodbye with a blue screen. It could be related to the fact that Microsoft has abandoned the Windows Media Center and is therefore not as interested in maintaining the TV section to keep it compatible and functional. The times when existing hardware remained usable for years in a stable Windows installation are probably over with Windows 10.

According to the moderator's assessment, the only thing that remains at the moment is probably the rollback to Windows 10 1909, in the hope that Microsoft and/or the manufacturers of the DVB devices will fix the problems in the next few months. Especially with older devices it is doubtful whether there will be another driver update for them.

In the thread someone posted this tip. There you can find the hint that some DVB receivers run with alternative drivers from Haupaugge. With an updated driver the problems were gone.

In this post a tester points out that when trying to stream signals via LAN/WLAN on old notebooks the problems in the WLAN also occurred. So Microsoft has changed something about Windows 10 Version 2004, which has a negative effect on such scenarios. WLAN drivers are also suspected to be the cause here.

German blog reader Manfred wrote in an addendum that he found a driver from 2019 for his pctv-stick at Hauppauge – not at pctv. But there are no hints there, so he first has to look into the .inf file to find out for which devices the driver can be used. He assumes that the driver will solve the problems, but he cannot be sure.

Windows as a Service as the wrong way

All in all, the case once again shows in an exemplary way how downhill people have gone with Windows 10 and its Windows as a Service. When I see that Windows 10 actually doesn't bring me any product advantages, but on the other hand I notice how often working hardware or software is promoted to useless/broken product by the half-yearly feature updates, Windows 10 is a gigantic product and capital destruction program. The user community hangs only on this platform because there is no real alternative. Or how do you see it?

This entry was posted in issue, Windows and tagged DVB, issues, Windows 10 2004. Bookmark the permalink.