[German]Microsoft has just confirmed a new problem with Windows 10 version 2004. After an upgrade, older devices and applications may experience problems with the OneDrive 'Files On-Demand' feature.

OneDrive's Files On-Demand feature allows users to view all files stored on OneDrive locally in Explorer without having to download them and occupy space on Windows. With Files On-Demand enabled, Windows 10 displays all OneDrive files in File Explorer. It also shows the information needed for each file. Only when a file is opened does the OneDrive client download its contents to the local Windows 10 computer. Microsoft has described this feature in more detail in this article.

Unfortunately, upgrading an existing Windows 10 system to the Windows 10 May 2020 Update (version 2004) can cause problems in the OneDrive "Files On-Demand" area. On reddit.com you can find this post from the beginning of June 2020 which reports about problems.

OneDrive stopped working as soon as I updated to Windows 10 2004. Initially I got the error "OneDrive cannot connect to Windows", which gave me the options "Try again" or "Download all".

I tried the steps at https://support.microsoft.com/en-us/office/-onedrive-cannot-connect-to-windows-error-when-accessing-files-in-onedrive-7c5b675f-555e-4aa1-b4d8-554698c2c2b9 without success. A restart did not fix it either.

Even worse, after choosing "Download all", the sync made no progress after downloading just a few MB.

Following the advice on the OneDrive website, I tried the "Reset OneDrive" thing and now it's been stuck for a day on "OneDrive is updating files – Processing 12,979 changes", often using 30% CPU time but never actually downloading anything. Now I can't even open the files which I already had on my PC.

This reddit.com post addresses the same problem that "Files On-Demand" is simply broken in Windows 10 version 2004.

After you upgrade to Windows 10 version 2004, some older devices, or devices with certain older installed applications that use older file system filter drivers, might not be able to connect to OneDrive through the OneDrive application. This removes the ability to use Files On-Demand to download new files on demand or to open previously synced/downloaded files. 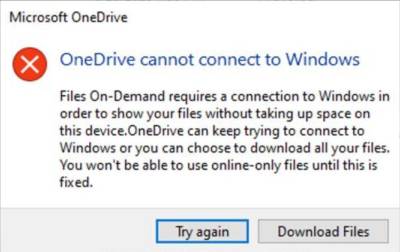 Microsoft has published the above screenshot with the error dialog box.

This entry was posted in issue, Windows and tagged issue, OneDrive, Windows 10 2004. Bookmark the permalink.