[German]ACROS Security has released a micropatch for the vulnerability CVE-2020-1380 (Internet Explorer scripting engine memory corruption ) for Windows 7 and Server 2008 R2 (without ESU license). The vulnerability is now being exploited.

CVE-2020-1380 was issued for a scripting engine memory corruption vulnerability in Internet Explorer. The vulnerability could corrupt memory in such a way that an attacker could execute arbitrary code in the context of the current user. Microsoft writes about this:

In a Web-based attack scenario, an attacker could set up a specially crafted Web site that uses Internet Explorer to exploit the vulnerability and then trick a user into visiting the Web site. An attacker could also embed an ActiveX control that is marked as "initialization-safe" in an application or Microsoft Office document that hosts the Internet Explorer graphics rendering engine. The attacker can also exploit compromised Web sites and Web sites that accept or host user-provided content or advertising messages. These Web sites may contain specially crafted content that could be used to exploit the vulnerability.

On August 11, 2020, Microsoft released a security update for Internet Explorer 11 that addresses the vulnerability and closes the vulnerability in the scripting engine. The fix is included in the Rollup Update for Windows 7 SP1.  However, users of Windows 7 SP1 and Windows Server 2008 R2 who do not have an ESU license will no longer receive the security updates released by Microsoft.

ACROS Security has developed a micropatch for the vulnerability CVE-2020-1380. I got aware of the information about the release of the micropatch for Windows 7 SP1 and Windows Server 2008 R2 via Twitter. 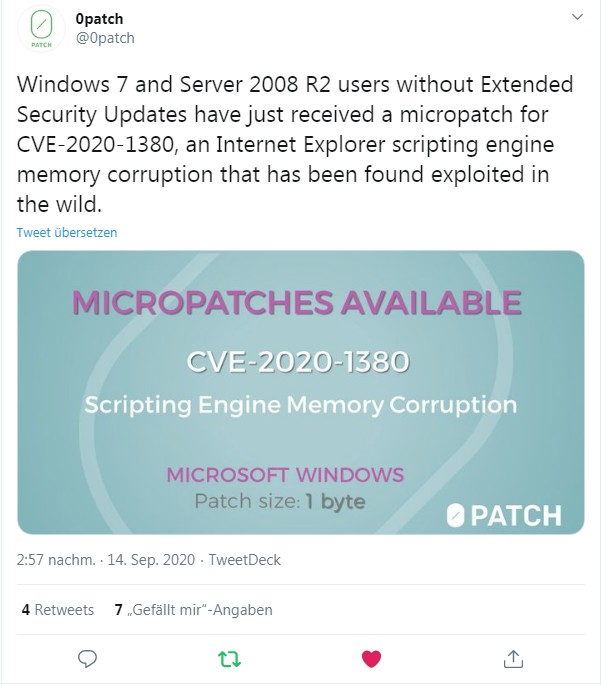 This micropatch is now available for 0patch users with PRO license and is already applied to all online computers with 0patch Agent (except in non-standard enterprise configurations). As always, there is no need to restart the computer and users' work is not interrupted.