[German]A brief information for user of an Apple smart watch or iOS 14 device, using Microsoft's Authenticator app. After updating to Watch OS 7 or iOS 14, communication with the two-factor authentication app no longer works. And there are also problems with GPS tracking under Watch OS 7.

Issues with the Microsoft Authenticator app 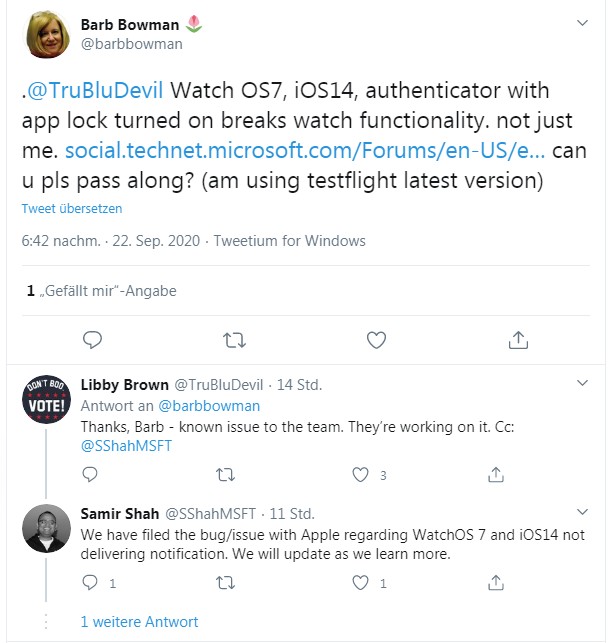 After installing watchOS 7 I approve the authenticator pop on my watch I receive the message 'something went wrong'. I can only get the approval to work to do this from the app on my iphone. Anybody else got the same problem? Is it watchos7 related?

The error is confirmed by several people. According to a Microsoft employee the problem is known and the developers are working on it. Maybe as a hint, if someone is using the Apple Smartwatch for two-factor authentication.

Softpedia also reports in this article that there are problems with GPS tracking after updating to Watch OS 7. Users complain on Apple's forums that no GPS information is logged for their training. Here is such an entry:

This morning I upgraded my iPhone XS Max to iOS 14 and my S4 Watch to watchOS 7. I then went for a run, using the Outdoor Run activity on my Watch as usual, holding my iPhone while I ran (as I was listening to a podcast with AirPods). When I finished, everything was recorded as normal, and I could sync the activity to Strava.

Later, I went for a walk. I used the Outdoor Walk activity on my Watch, but this time didn't take my iPhone. When I returned, and attempted to upload the activity to Strava, I received a warning that no GPS/route data was present. I checked the Fitness and Health apps, and sure enough, there was no route on the map – only the starting point.

I spoke to someone at Apple Support and they suggested I turned off/back on a couple of related privacy settings. I have since tried another Outdoor Walk activity, without the phone present, and the problem persists – no GPS/route data.

My wife also tried the same this evening, after upgrading her iPhone X and S4 Watch too. She had the same results – i.e. with just the Watch, no GPS/route information was saved with the activity.

The user asks whether other users are affected. Other Apple Watch owners confirmed this issue. An Unpair/Reset/Repair of the Apple Watch does not solve the problem. Apple Support has confirmed to a user that the problem is a problem and the developers are working on a solution. Anyone affected by these issues?

This entry was posted in devices, Security and tagged iOS 14, Security, Watch OS 7. Bookmark the permalink.