[German]A story that brings tears to your eyes. Security researchers have discovered that the Cellmate chastity lock for men is hackable. It can be closed by hackers forever, no way back. Eh man, have a bolt cutter…

Almost swept me out of my desk chair when I read the tweet from Pen Test Partners and their report an hour ago. I was theoretically familiar with the topic of 'chastity lock cock-up'. But I didn't know that such a thing is also available electronically as an IoT version and with an app (I guess I'm getting old). 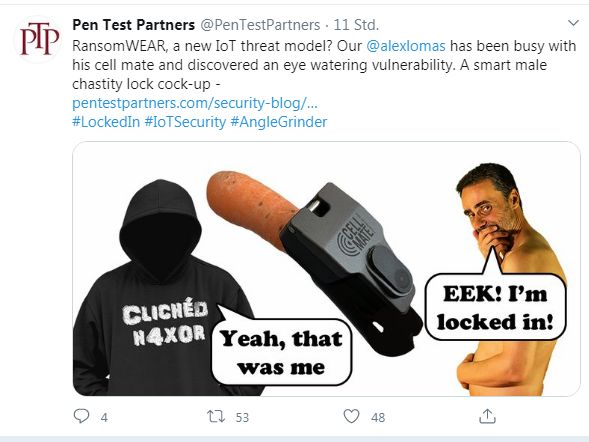 The security researchers discovered that an attacker can prevent the opening of the Bluetooth lock and permanently lock up the wearer of the chastity lock device. There is then no way to unlock the device. Only a good bolt cutter or an angle grinder will help to free the carrier. I see the guys from the fire department coming back from the 'emergency mission' with tears in their eyes.

In addition, the API of the IoT device was knitted in such a way that the location of the device, the password in plain text and other personal data could be accessed by third parties without requiring authentication. The following map shows location data of the devices in use – let me put it this way: From a marketing point of view, there are still many white spots to fill.

This entry was posted in Security and tagged IoT, Security. Bookmark the permalink.