A user note about the problem

German blog reader Roland K. recently posted this comment (in my German blog) and points out that, starting with Windows 10 version 2004, the 'Modern Standby' can no longer be switched off on supported machines. Roland writes (I've translated his comment):

In our case, this feature causes the SAP GUI to lose the connection to the server as soon as the client switches to modern standby mode. The activated option "Allow network connectivity during connected-standby" unfortunately does not help either.

Since the SAP GUI is unfortunately not able to perform an automatic reconnect, the program has to be terminated and restarted manually.

Until Windows 10 1909, Modern Standby can be deactivated via registry. But from 2004 this is no longer possible.

Are there perhaps some good tips on this topic somewhere?

There are more complains about problems caused by the Modern Standby mode. Thus, heat and thus battery problems in the Microsoft Surface 2's sleep mode, the Dell XPS 15, the Asus Zenbook 15 and the Lenovo Ideapad S740 are mentioned within this German article. This prompted me to take up the topic and take a closer look.

Finding in the Internet

There are two energy saving modes under Windows 10: S3 and Modern Standby (S0 Low Power Idle) – see also. The S3 energy saving mode is the older standard, but it can't provide the InstantGo called instant operation of a Windows 10 system. Therefore Microsoft has further developed the Connected Standby concept of Windows 8.x, which is based on the S3 mode, into the S0 Low Power Idel 'Modern Standby'. Modern Standby is able to use all the capabilities of a modern chipset and can be integrated into the whole range of today's tablets and PCs.

What Microsoft says about Modern Standby

In this article Microsoft talks about Modern Standby, its advantages and the requirements for partners. Modern Standby is available for both Windows 10 Desktop and Windows 10X. It is important to note that switching between S3 and Modern Standby mode cannot be done by changing a setting in the BIOS. Changing the power model is not supported in Windows without reinstalling the operating system. Microsoft has published the following graphic which shows that the two models have nothing in common. 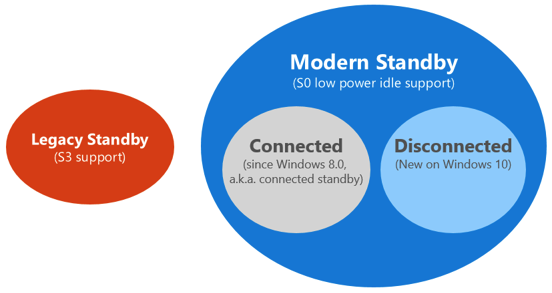 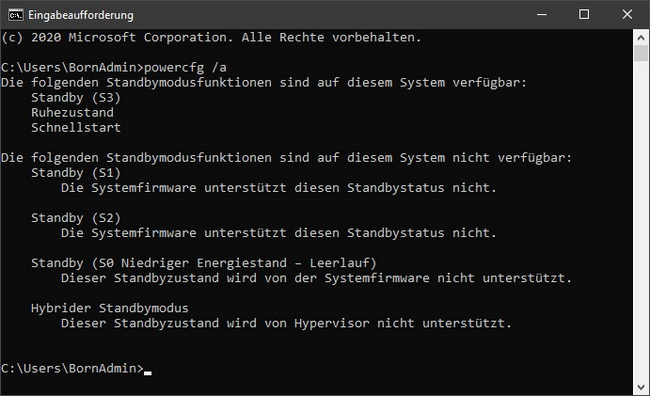 This article shows an output for a system that supports the S0 Modern Standby. A rant about the unlockable Modern Standby mode in Windows 10 V2004 can be found in the Technet forum – people are pretty pissed off.

Until Windows 10 version 1909, it was possible to control Modern Standby by a simple registry value in the key:

If the DWORD value CsEnabled was set to 0, this switched off the mode. But from Windows 10 version 2004 on, this registry entry is no longer functional, i.e. the hack mentioned in several articles in the Internet does not work anymore.

In order to be able to retrieve e-mails in Modern Standby in the background, it should be possible to maintain the network connection. Whether this is the case can be controlled with the group policy Allow network connections in connected standby mode (battery operation). Alternatively, you can also alter the registry:

There the 32-bit DWORD values ACSettingIndex and DCSettingIndex must be entered with 0. The colleagues of German site deskmodder.de have explained this in more detail here.

Depending on the BIOS/UEFI variant Modern Standby can be deactivated directly and the older S3 mode can be activated. However, the changeover as outlined there might not be very easy, because according to the Microsoft documentation in Windows 10 quoted above, the change of the energy model in BIOS needs reinstalling the operating system.

On reddit.com you can find this article, which deals the problem for Dell 64 bit systems. Dell removed the BIOS option to disable the S0 mode. In the reddit article the user describes a step-by-step procedure to reforce the S3 mode on 64 bit Dell systems with Windows 10 version 2004 installed.

However, on new AMD Ryzen 4000 notebooks the approach does not seem to work and there are reports about BlueScreens. In most cases, users need to perform a clean Windows 10 installation after setting up the old mode. Therefore Microsoft may have published the above mentioned limitation that a mode change via BIOS requires a fresh installation.

The reddit.com thread here reports that Windows 10, version 20H2, again allows disabling Modern Standby by registry entry. This is done in the registry in the key:

Enter the 32-bit DWORD value PlatformAoAcOverride and set it to 0. By the way, Microsoft has documented this registry key in this Windows IOT core support article. The topic has been named as 'Dell Hell and Modern Standby' – maybe it will work and help affected users. 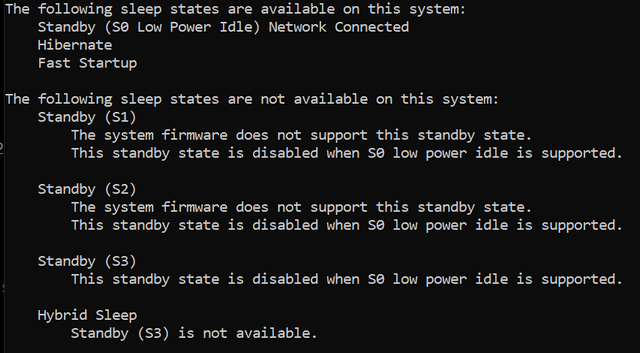 Blog reader Roland K. sent me the above screenshot showing the state before the registry value was entered. There the S0 mode under Windows 10 20H2 Pro is listed as active. Below you can see the output after setting the registry entry. 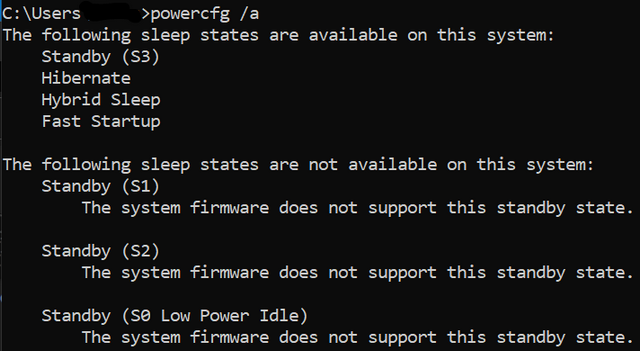 Now the S3 mode for energy saving is active.