[German]If the disk layout on Windows machines does not comply with Microsoft specifications, this can quickly lead to trouble. During update installation, rollbacks occur and the installation of the feature updates fails due to an error message. Here is a summary of what you should know and observe.

German Blog reader Martin Feuerstein contacted me by mail in mid-November 2020 and reported about two issues with the installation of cumulative and feature updates. Both could be traced back to the partition layout.

So different issues, but same cause. Solution is actually "only" the conversion from a – after all bootable – MBR layout to a UEFI-compliant layout. In theory, there are already tools (MBR2GPT, GPTGen) for a smooth conversion, but in practice only the mace (backup + delete partitions + restore) worked.

In the first case a notebook should be upgraded from Windows 10 version 1809 to a newer Windows 10 build. The notebook is a Fujitsu Lifebook E752, is about 8 years old. There are no settings in the BIOS/UEFI regarding Secure Boot or CSM (Compatibility Support Module). When starting Windows, as with other non-UEFI devices, the Windows flag is displayed and no manufacturer logo, as would be usual with UEFI. No reference to UEFI.

Problem with this device is that the setup already at startup displays the error Windows cannot be installed because this PC has an unsupported disk layout for the UEFI firmware (I've translated the German error message shown within the below screen shot). 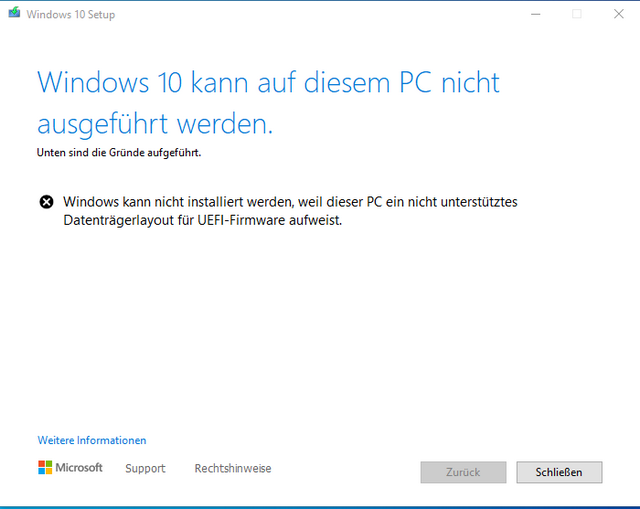 What is the root cause? The partition layout did not fit the requirements from this Microsoft manual. Here is the the data layout obtained with diskpart in the command prompt window. 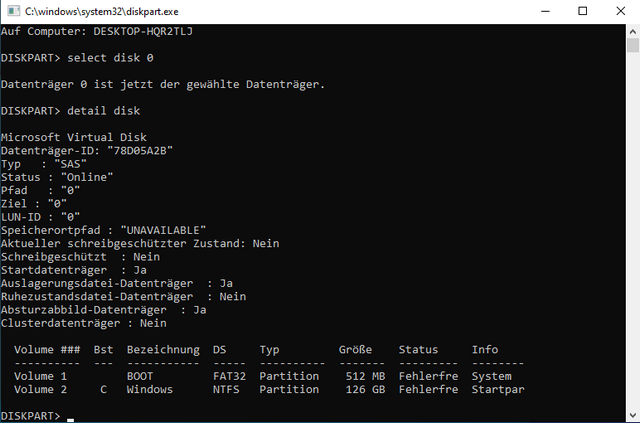 It's an obvious problem, but annoying, because there is a Windows 10 running and only an upgrade should be done. The solution: Change the layout of the hard disk to Microsoft's requirements and then install it.

The second case involved two Windows servers, one VM with Server 2012 R2, one VM with Server 2016, which after cumulative update installation fell into roll backs during the boot phase, while other updates (e.g. Office) are installed without error message. The VMs were previously migrated from VMWare ESX to Hyper-V. Other servers in the same domain do not show any abnormalities, until before the migration there were no problems with the updates either.

No indication of an error in the event log, except that the updates cannot be installed. But an error is shown in the CBS (Component-Based Servicing) logs in c:\Windows\Logs\CBS that the boot partition was not found:

So it was clear that the partition layout was also involved. Martin writes:

The VMs were previously run as a BIOS machine with MBR layout, but after the conversion they were run as Gen2/UEFI VMs under Hyper-V. For simplicity, a FAT32 partition for the boot loader was written to an MBR disk and the operating system was written to an NTFS partition

Previously the MBR layout was defined as the standard for hard disks – i.e. up to four primary partitions can be created on a disk, the boot partition (the partition with the boot manager) is set "active". Works this way since the introduction of MS-DOS. To create more than the four partitions per disk an extended partition can be created which itself contains logical partitions.

Windows will start regardless of whether a BIOS or UEFI (with or without CSM) is present, provided that the boot manager can be read from a partition. For the BIOS (MBR layout) the active set partition is decisive, for UEFI the entered path to the boot manager. Alternatively UEFI also loads boot loaders from a FAT32 partition without this partition being entered in UEFI.

With an MBR layout, the FAT32 boot partition (set active for MBR) and the operating system partition, we now have a disk that can in principle boot on a BIOS computer and a UEFI computer. So everything is fine, isn't it? 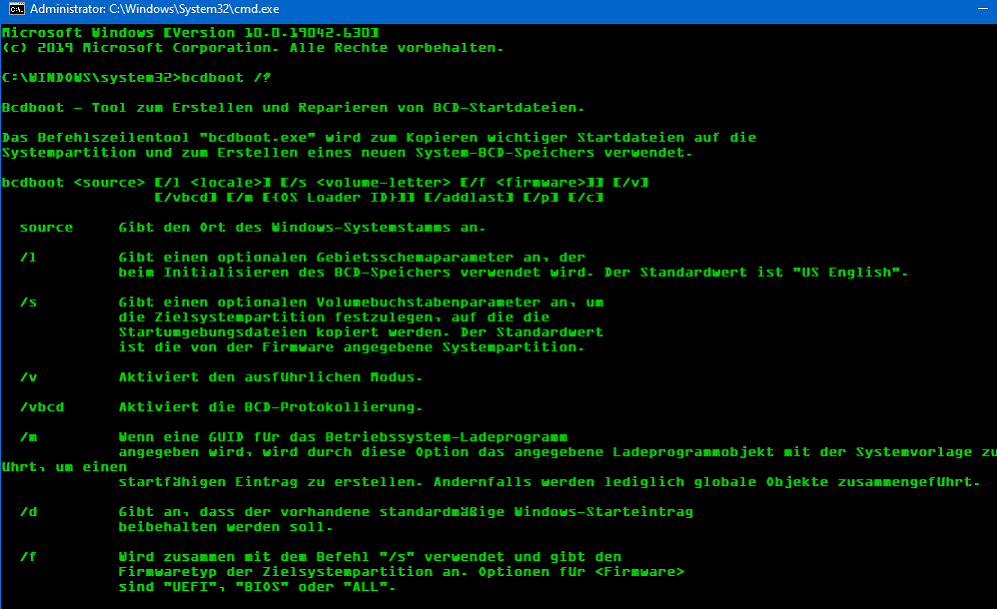 Note: When setting up the boot manager using BCDBoot you can specify which boot method should be set up: either BIOS (/f BIOS), UEFI (/f UEFI) or a hybrid (/f ALL), which can do both.

How to solve the the update and feature update installation issues?

Basically the disk layout for the UEFI boot must be changed to GPT and a corresponding boot manager must be written. The Windows disk management does not allow the subsequent conversion of the system disk, so the disk would have to be reinitialized with the GPT layout and the operating system would have to be reinstalled.

But for the conversion there are e.g. the on-board tools MBR2GPT (didn't work for me) or GPTGen (didn't work for me either, or I didn't use the right parameters). Other partitioning programs (mostly for a fee, at least for business customers) may be able to do MBR-GPT partitioning, but Martin have not tried them. He performed the following steps:

This can be done, for example, with DISM, a Microsoft tool, in a recovery environment

For additional partitions on the disk, DISM must be executed again accordingly

The disk will be reinitialized according to this MS document – below these drive letters are assumed:

The operating system is restored to the newly created partition

Then the boot manager is written to the newly initialized disk to make the operating system bootable:

After these steps the system should be able to install updates or function updates as usual. Thanks to Martin for this write up. Maybe it will help somebody.