[German]With support end for Adobe Flash at the end of 2020, the Flash player has stopped working on January 12, 2021. In China, this has led to trains coming to a halt because the operator was not able to use their train scheduling software due to the stopped Flash player – the software developers of this software wasn't aware of the end of support.

Several media such as the German sit Golem have reported that incident.This was noticed by journalist Tony Lin, who described it on Twitter. Lin's tweets, which translated the official announcements in Chinese into English, are hilarious. Those responsible have identified the reason for the disruption as being that the American company Adobe has switched off its Flash. 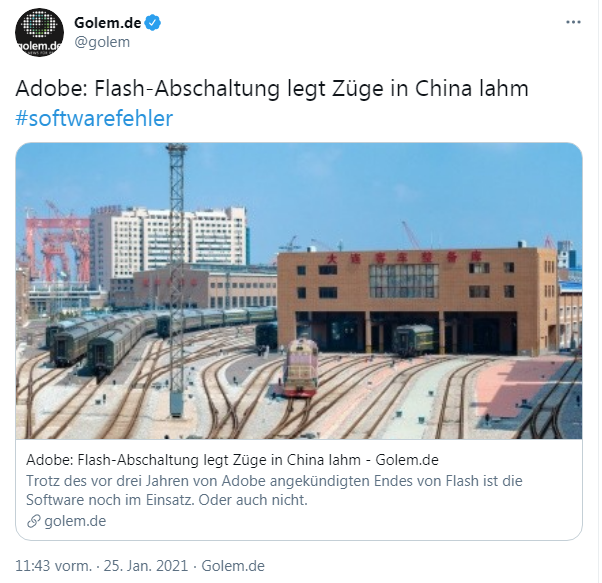 In China, not everyone was aware of this. The railroad company China Railway Shenyang Group was hit hard, as its trains came to a standstill for 20 hours in Dalian in the northeast Chinese province of Liaoning because the Flash player was switched off. The background: the train scheduling software was based on Aobe Flash and failed to work. The railroad company's employees were unable to call up operating schedules and consequently could not put together trains. The entire rail traffic was suspended due to this malfunction for 20 hours.

The Hong Kong based site Apple Daily reported the case here, the timeline of the development has been documented in Github (Chinese translated by Google translator). It reads:

The section computer room received a fault repair call from the head of the station shunting. The head said that the current train system of the railway bureau could not display the page, which made it impossible to view the train operation chart, the train formation sequence table could not be formulated, and the shunting plan could not be arranged. In the next 30 minutes, almost all the transportation and production computers had the same failure.

After contacting the railway bureau and searching for information on the Internet, it was confirmed that the source of the failure was related to the total prohibition of the operation of Flash content by the American company Adobe. 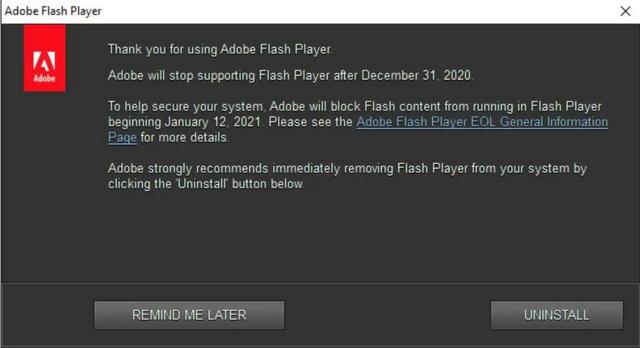 Bosses were activated and one hardware and one software crisis team were formed. Among other things, Flash was reloaded from an old 'ghost system,' but that didn't last. The IT people then worked, and fought from crisis to crisis.As an emergency solution, an old Flash Player version, which did not yet have a time bomb, was installed after hours. The following morning (January 13, 2021) at around 4:30 a.m. local time, the software was running again with the old Flash version and the trains could run again.

There we have handled the Y2K problem, the end of Windows 7 support, and now this. You never stop learning. It could also have something to do with the fact that Chinese developers are sealed off from the West by the great firewall and are locked into 'annual plans' – the curse of the planned economy.

This entry was posted in issue, Software and tagged Flash, issue. Bookmark the permalink.