[German]Since the end of April 2021, numerous users have been complaining about a broken autocomplete display in Outlook that only shows large icons and the entries are no longer readable. The whole thing probably occurs with Outlook version 2016 and 2019 and seems to have been triggered by a Microsoft Office 365 update from late April 2021. Here is a summary of what has come to my attention so far.

I first came across the bug on Facebook on May 4, 2021, where a user described the problem and posted the following screenshot. The German text says, that autocomplete is broken since May 4, 2021 in Outlook 2019. 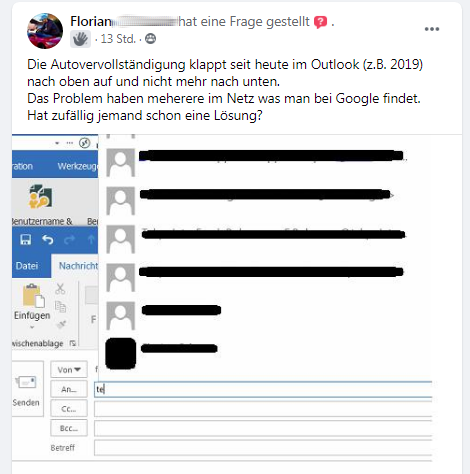 The list with the autocomplete entries no longer opens downwards, but expands upwards. As a result, the topmost entries are cut off and are no longer readable. Also, it looks like the icons are displayed very large and incorrectly. Because of the coincidence in time, I had discussed the bug within in the blog post Microsoft Office Patchday (May 4, 2021).

However, the bug seems to relate to Outlook from Click-2-Run versions (Office 2016/2019 and Office 365) and has nothing to do with the updates that were rolled out for the MSI versions of Microsoft Office. In the meantime, there are also numerous other reports about this error:

Meanwhile, blog readers have pointed me to this post on slipstick (by MVP colleague Diane Poremsky), where the problem is documented with another screenshot. A blog reader also pointed out to me that the problem is now known to Microsoft’s developers.

In this reader comment, a blog reader then gives the hint that this behavior is probably caused by an update of the Click-2-Run versions of Outlook 2016/2019 or Office 365.

However, version 2104 (build 13929.20296) was rolled out for Microsoft 365 in the current channel on April 29, 2021, according to this tenforums post. The update is supposed to fix several bugs, which are listed in the linked forum post. So going back to a previous program version has been suggested as a (temporary) fix for the autocomplete bug.

Diane Poremsky still points out the variant for a 32-bit version in this forum post. Further Diane Poremsky published in this post still some references to it.

In this comment Tobias Klein writes that cleaning the autocomplete list via the Outlook settings solves the problem with the autocomplete opening upwards. After that, the list would open back down and everything would be fine again. This is confirmed by other users. Diane Poremsky has worked on this issue on Slipstick Systems in this post and presented a registry entry to disable AutoCompleteUpdate:

After adjusting the registry entry, a restart of Outlook should be required. Sounds quite good, but blog reader Michael Bonjour points out the following in this comment on the German blog:

Michael gives some hints in the commentary on approaches to temporarily fix the problem. Let’s hope that Microsoft will fix the bug again sometime with an update.

This entry was posted in issue, Office, Software and tagged Bug, Outlook. Bookmark the permalink.