[German]If you need to setup Windows or needs to transfer to another machine, the necessary drivers are required. Windows already comes with a set of Microsoft drivers that are installed during setup. The rest of the drivers you obtain from the manufacturer and install specifically. Wouldn't it not be cool to be able to export the drivers installed on a perfectly set up system to a folder as a backup? And how can you read back (install) the drivers from the backup folder?

A driver backup via export

This is exactly what you can do with the dism command supported in Windows 10, as Thorsten E. outlines in the following tweet. 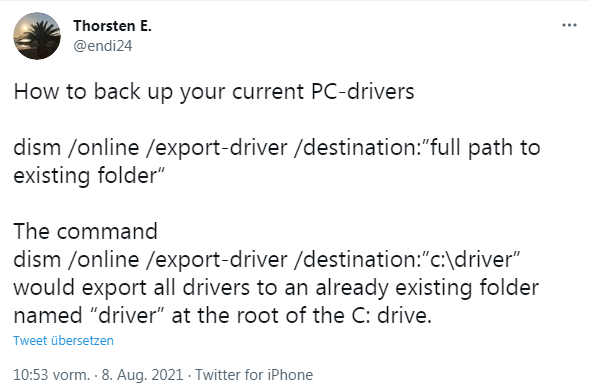 For exporting, the destination folder must exist on a drive and this medium must have enough free capacity. Then open an administrative prompt via Run as administrator and enter the command:

<path> stands here as a placeholder for the path to the folder in which the driver backup is to be created. The folder must exist, otherwise dism aborts with an error. The following screenshot shows this export on a Windows 10 system.

Microsoft has documented this dism option in this post. The following screenshot shows the folder with the exported drivers, which can be very large. 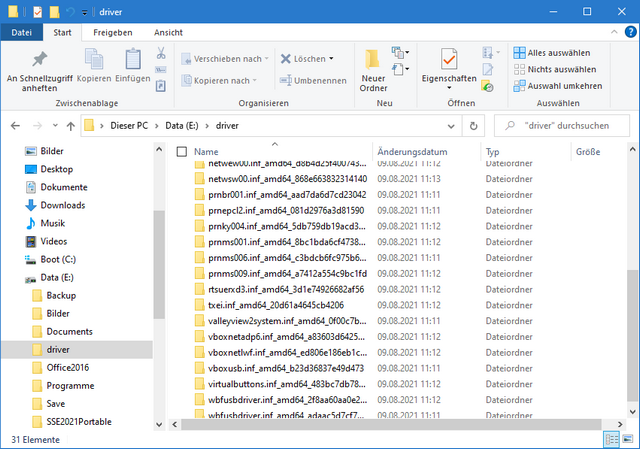 With PowerShell the same should be possible with the command Export-WindowsDriver -online -path.

How to import drivers?

The interesting question is: How can we import the drivers exported as a backup? The dism command does not know an import command, but there are approaches to reinstall the drivers.

Dell suggests installing the drivers via the Device Manager. For each device, the Update driver button can be selected on the Drivers tab. In the dialog box for driver search, the target folder with the saved drivers can then be specified via Search for driver software on the computer. Also the article here suggests exactly this approach.

A recursive installation of all exported drivers (import) from the backup folder could be done with the DOS command pnputil.exe. The command is described in this Microsoft document. The command:

executed from an administrative command prompt, should install the drivers backed up in the backup folder. Robert Kraus has described this approach in more detail in his German blog post here. Maybe it will help you.

This entry was posted in Windows and tagged Tip, Windows. Bookmark the permalink.