[German]On August 20, 2021, Microsoft published recommendations on the subject of virus protection for on-premises Microsoft Exchange Servers. Recommendations are also given there regarding the exclusion of certain folders from virus scanning. On the other hand, we are experiencing waves of attacks on Exchange Servers via vulnerabilities such as ProxyShell and ProxyLogon. The attackers then deposit a WebShell on the infected Exchange systems. Therefore, it is reasonable to ask whether Microsoft's recommendations are good advice.

Microsoft ex employee and security researcher Kevin Beaumont stumbled across the support post and promptly points out in the following tweet that when it comes to ProxyShell and ProxyLogon attacks, it's important to note that Microsoft's own Exchange documentation instructs administrators to exclude all processes and folders used by attackers. 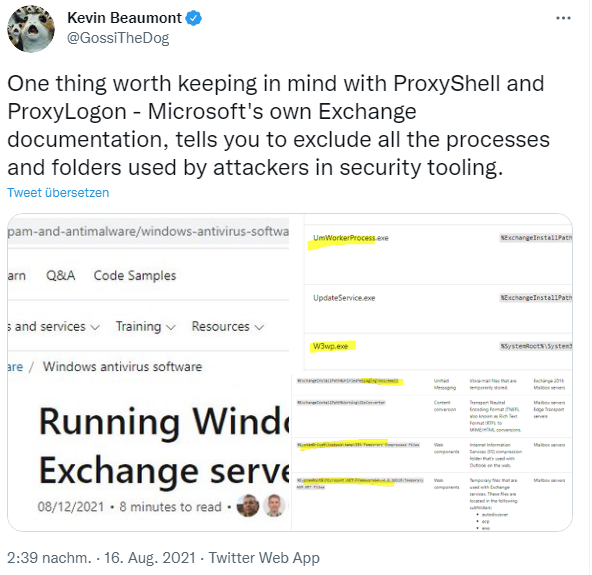 His recommendation is to critically go through the list of folders to exclude and decide what should really be excluded from the scan.

This entry was posted in Security, Software and tagged Antivirus, Exchange, Security. Bookmark the permalink.