[German]Windows Insiders who are testing Windows 11 as a preview version got an unpleasant surprise a few hours ago. Neither the Start menu nor the taskbar worked. Microsoft hurried up with a "we are investigating this" message and there is a workaround. And in a beta, things can go wrong. But the background is interesting: A promo for Teams seems to have been the reason for the failure of these shell components.

I haven't tested Insider Previews of Windows 10 or Windows 11 for quite some time. So I wasn't affected by the latest flaw in Windows 11.

Did a new build went wrong?

Shortly after the release of these Insider Preview builds, Microsoft was flooded with user messages that the Start menu and taskbar were no longer responsive and that the settings page could not be accessed. In the above tweet, Microsoft states that they are investigating the problem and ask for patience.

A fix is suggested

After a few hours, Microsoft announced in a tweet that they had found a fix and added it to the relevant Insider Preview announcement articles (here and here). 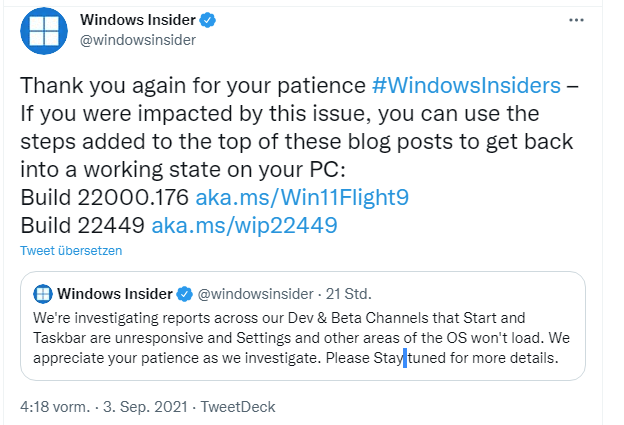 I've copied the instructions for the workaround here:

Step 1: Use CTRL-ALT-DEL and choose to open Task Manager.

Step 6: Hit enter, and then your PC should reboot. After rebooting, everything should be back to normal.

Thus, a registry entry has to be deleted and then restarted to cure the unresponsive taskbar or Start menu. Later, the Microsoft team added an explanation after the bug had been fixed by a service-side correction.

The interesting question now is what was the cause of this error, which led to the failure of the taskbar and Start menu, as well as other components. Microsoft is keeping a low profile in its blog posts and on Twitter. But one user provided the relevant clue to the background in this tweet. It is related to the integration of Ads services for advertisements. 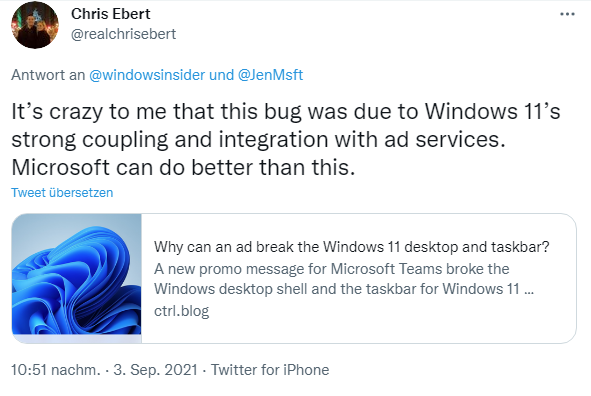 This blog post contains the relevant clues. Microsoft sent out a promotional message to preview testers of Windows 11. The promotional message was supposed to advertise the upcoming operating system's integration with Microsoft Teams. Instead, the message caused Explorer (the Windows desktop shell) to become unresponsive and left users without a working Start menu and taskbar.

The author of the blog post was affected by this issue after restarting his laptop to complete the installation of another software. It was annoying and frustrating for the tester to be left with a broken Windows desktop.

The sufferer then dug a little deeper and found that the problem was caused by a small file downloaded by a Windows component called IrisService. Iris is a part of Windows Spotlight (the Bing wallpaper of the day as well as tips, promotions and suggestions on the lock screen).

Using the workaround provided by Microsoft, the tester was able to narrow down the problem to a registry key that contained a serialized JSON blob. The blob contained an advertisement for Microsoft Teams. The messages and images in the ad were identical to the window users see when they press the Windows key + C on a Windows account that is not yet set up with Teams. However, it's unclear if it's exactly that ad, the author of the blog post writes.

And, he adds, there's a huge elephant in the room: how could Microsoft have let this happen? How can a single ad or JSON blog screw the shell when the associated service doesn't exist or is down. The author of the article fails to find an answer to the question of why the Windows shell was so poorly designed in the first place to become unresponsive because of a single failed cloud service?

The user follows up by saying that advertising in Windows is important to Microsoft, but is not on the priority list for customers. Customers don't want advertising in Windows! Millions of people rely on Windows every day, and it simply has to be more robust than what is delivered with the Insider Preview. Bleeping Computer has given some more hints here.

Even though these are all still Previews, it's crystallizing that Microsoft doesn't really have a handle on the development processes there either. And on October 5, 2021, the product is supposed to be unleashed on the general public.