[German]IBM warns that QRadar Azure  warn is vulnerable to remote attacks via the OMIGOD vulnerability CVE-2021-38647. Remote attackers could execute arbitrary code. This would have a similar impact to the supply chain attack on Kaseya VSA, a remote management and monitoring (RMM) software.

What is IBM QRadar Azure?

Security experts warn in the following tweet that the Open Management Infrastructure RPM package in IBM QRadar Azure Marketplace images is affected by the vulnerability CVE-2021-38647. 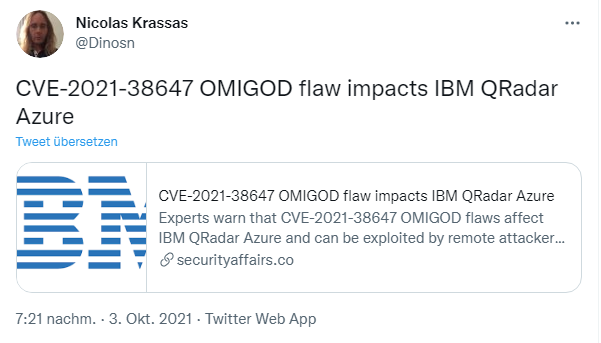 This is a remote code execution vulnerability rated at CVE value 9.8, which is also part of the Azure OMIGOD vulnerabilities recently discussed here on the blog. In the case of IBM QRadar Azure, a remote attacker can exploit the vulnerability to execute arbitrary code on vulnerable installations, according to this article or this IBM Security Bulletin.

The vulnerability can be triggered by running a specially crafted program on vulnerable systems and affects the following versions:

An unauthenticated attacker can remotely exploit the vulnerability by sending a specially crafted message over HTTPS to the port listening for Open Management Infrastructure (OMI) on a vulnerable system. On most Linux distributions, the command:

indicates whether processes are listening for <port number>. Microsoft fixed the vulnerability with the release of security updates on Patch Tuesday in September 2021 (see Patch Microsoft Azure vulnerabilities OMIGOD in Linux VMs).

This entry was posted in Cloud, Security and tagged Azure, Security. Bookmark the permalink.