[German]Another article about a topic, that has been floating around for a few days, but due to time constraints has not yet migrated to the blog. If you use a VPN provider, you have to trust 100% that it is reputable and does not siphon off data or misuse it. So the information here fits like a glove: The former malware distributor Kape Technologies is now the owner of ExpressVPN, CyberGhost, Private Internet Access, Zenmate and a number of VPN "test" websites.

The topic came to my attention on Twitter a few days ago and is discussed in detail within this blog post. 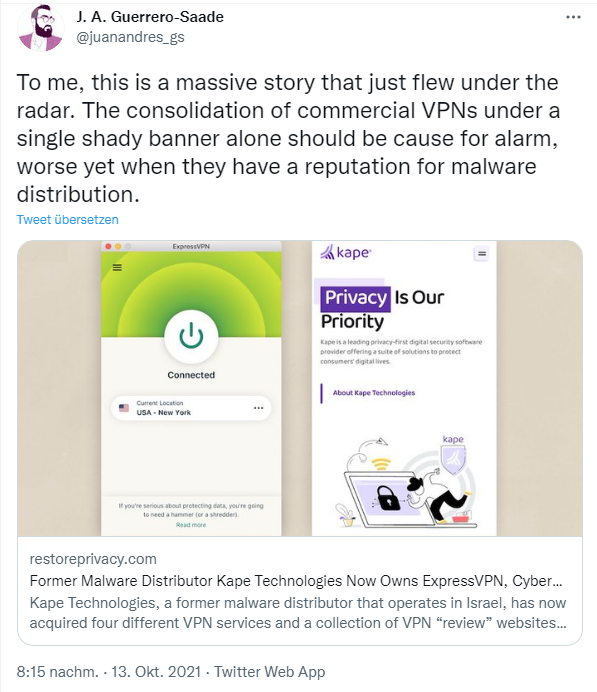 Back in August 2020, CNET reported in this article that Kape Technologies had purchased CyberGhost VPN, a VPN service founded by German Robert Knapp and operated in Romania (purchase was in 2017). Specifically, the sale was to Crossrider. This company has been operating as Kape Technologies since 2018 and used to make a name for itself selling malware or adware for browser extensions (see, for example, this MalwareBytes post on Crossrider infections). One of the founders has at least some proximity to Israeli intelligence (Unit 8200). In 2018, Kape Technologies also bought VPN ZenMate, and in 2019, Private Internet Access (a US VPN provider), as you can read in the CNET article and here. Then in 2021, ExpressVPN was purchased for $936 million.

Kape Technologies then bought a handful of VPN review sites in 2021. So, the VPN service provider also has some well-known websites that rate and recommend these VPN providers for users around the world. That this is a conflict of interest is probably obvious. At this point it occurs to me that a few weeks ago I got an offer to advertise VPN services. The details have slipped my mind, partly because I didn't respond to it.

What shocked me a bit now: In May 2021, it was announced that Kape had purchased a company called Webselenese. Like Kape Technologies, Webselenese operates out of Israel and runs the vpnMentor.com and Wizcase.com websites. Together, these two sites have a monthly search traffic of about 6.1 million visitors (September 2021), according to Ahref's traffic analysis tool.

I've received information from vpnMentor about data leaks found on the Internet before, and I've addressed those here on the blog as well. However, I had let a lot of those reports go under the radar lately. Looks under the above information now as if the entire area VPN services and also VPN review sites is pretty burned. vpnMentor should now also have a hard time getting through with his information.