[German]Two add-ons named Bypass and Bypass XM, which together have about 455,000 users, have been blocked by Firefox developers. The background is that the add-ons abused the Firefox proxy API to redirect websites or block updates. Here is some information about it.

On reddit.com  there is this post where someone asks about the Bypass Paywall add-on remaining. Meanwhile, the links on Github lead nowhere, and the project has switched to Chrome add-ons (see).

If I have understood correctly, the two add-ons Bypass and Bypass XM are used to bypass paywalls of websites. After all, 455,000 users have used these add-ons. The colleagues from Bleeping Computer have addressed the issue in the following tweet and in this article. 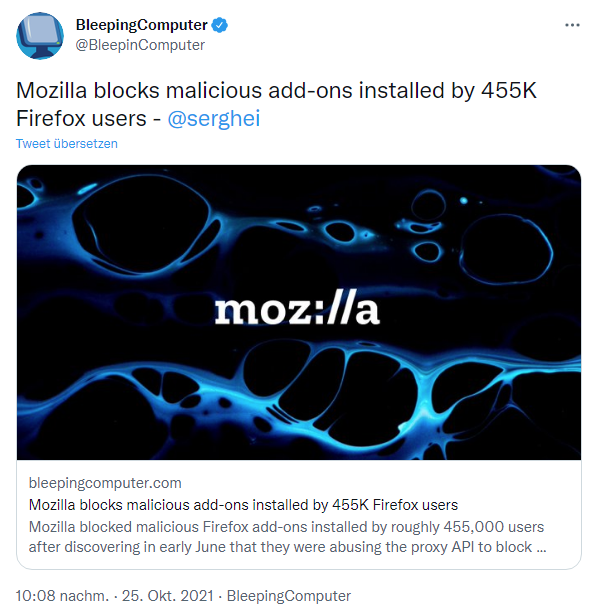 The colleagues write that in early June 2021 it was discovered that the two malicious add-ons abuse the proxy API to block Firefox updates. The add-ons used the API to intercept and redirect web requests. They also prevent users from downloading updates, updating remotely configured content and accessing updated block lists. Rachel Tublitz and Stuart Colville of Mozilla are quoted by Bleeping Computer thus:

To prevent more users from being affected by new add-on submissions that abuse the Proxy API, we have paused approvals for add-ons that use the Proxy API until fixes are available to all users.

As of Firefox 91.1, developers have responded to such approaches and can use direct connections for important requests such as updates and bypass the proxy configuration when needed. To block similar malicious add-ons that abuse the same API, Mozilla has added a system add-on (hidden, cannot be disabled and updated without rebooting) called Proxy Failover, according to Bleeping Computer. This new add-on prevents attempts to disrupt update mechanisms in current and older Firefox versions. More details may be available from colleagues. Did anyone have the add-ons in use?

This entry was posted in browser, Security, Software and tagged Firefox, Security. Bookmark the permalink.