AMDs Secure Encrypted Virtualization (SEV) is a technology introduced in 2016 to encrypt virtual machine memory. AMD has published a white paper (PDF) here. This allows to isolate the virtual machine (VM) from the hypervisor. Later, SEV-SNP (SNP stands for Secure Nested Paging) was added. This AMD page still has an overview ready.

The other day I came across Microsoft's announcement via Twitter with the topic Expanding Azure Confidential Computing with new AMD-based confidential VMs by Mark Russinovich. 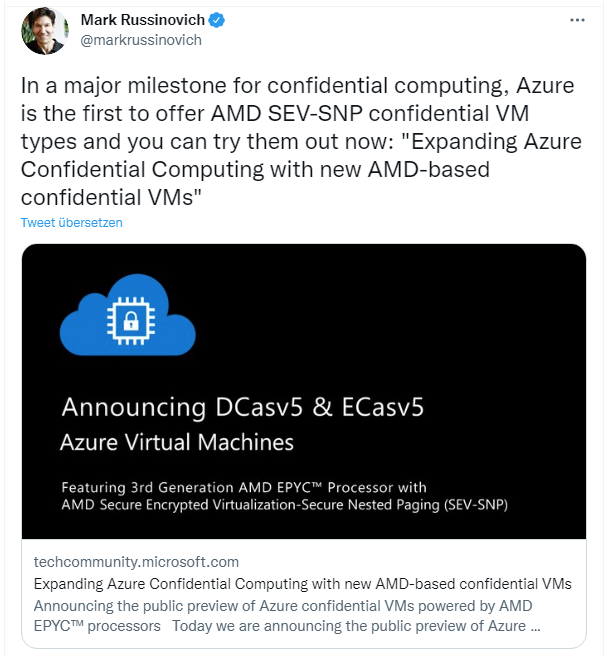 In a tech community post, Microsoft announced the public preview (preview) of Azure DCasv5/ECasv5 confidential virtual machines (VMs) powered by 3rd generation AMD EPYC™ processors with SEV-SNP. Microsoft writes that these new VMs provide an easy way to deploy confidential workloads, and do so without requiring any changes to existing applications or code.

Azure's new AMD-based confidential VMs are designed to ensure confidentiality not only between different cloud customers, but also between customers and the cloud itself.

Using the techniques, AMD SEV-SNP protects the guest by denying the hypervisor and other host management code access to VM memory and state, protecting against access by cloud operators. Combined with Azure Full Disk Encryption and Azure Managed HSM, customer code and data are encrypted in use, in transit and at rest with encryption keys that are protected and can be controlled by the customer. The VM in its entirety benefits from a strong layer of protection reinforced by hardware.