[German]Users who try to download the Google Chrome browser in the pre-installed Edge browser under Windows 11 sees problably a popup in the browser window. This popup tries to fool people into thinking that Microsoft Edge uses the same technology as Google Chrome, but that you're also getting "the trust of Microsoft" on top. It's an A/B test for some US users, but it's again a super fail.

Since 2020, Microsoft has been using the Google Chromium substructure for the Edge browser – after they didn't really get anything right with their own Edge browser engine. I had reported about this fact a long time ago (see links at the end of the article). You can do so – you can also enrich this substructure with your own ideas. So as a plain person I adhere to the idea: You create a product that is so good that people love it. Then they come voluntarily and use this product.

In Microsoft's own view, this image also seems to prevail regarding the Edge browser. It's just that the developers have somewhat lost the sense of what the user wants or needs. There the Edge is annoying with felt almost daily updates – and then also occurring problems. The week I had reported in the blog post User angry about Edge feature Buy Now, Pay Later that US users are not quite satisfied about that.

Behind the scenes, Microsoft seems to suspect that they simply can't compete with Google Chrome. Either the hut is on fire, or some kind of weed is smoked, which makes the developers or their bosses come up with the strangest ideas. Microsoft has already attracted negative attention in the past with actions described within the articles like Windows 10: Start menu promotion for Chromium Edge. But Microsoft can do it even better …

Microsoft's latest ramble regarding the Chromium Edge browser has been going around in the US media for days. Windows Latest touched on it in this tweet and elaborated in this article. 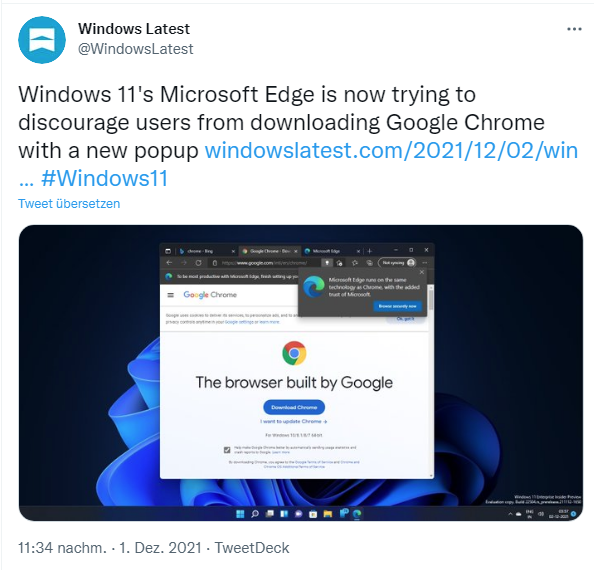 Windows 11 comes with the Edge browser pre-installed by default, so users can start using it right away. Now, however, there seem to be people who want to download and install the Google Chrome browser right away. Internally, Microsoft seems to be losing ground because a significant number of users are switching to Google Chrome – at least that's my conclusion. They try to prevent this by displaying a popup with the following content in the upper right Edge window when trying to download from the Google Chromium website (for some users in the context of an A/B test). 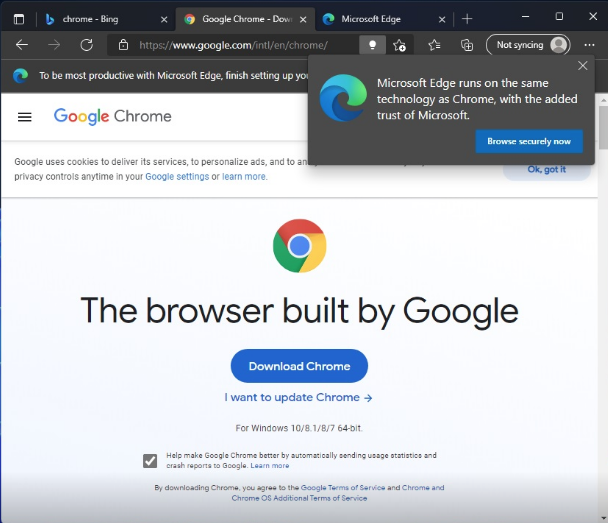 Edge tries to prevent the user from downloading the Google Chrome browser by displaying a pop-up stating that the Edge uses Chrome's technology, but additionally offers trust of Microsoft. The pop-up can be closed by clicking the "Browse securely now" button. 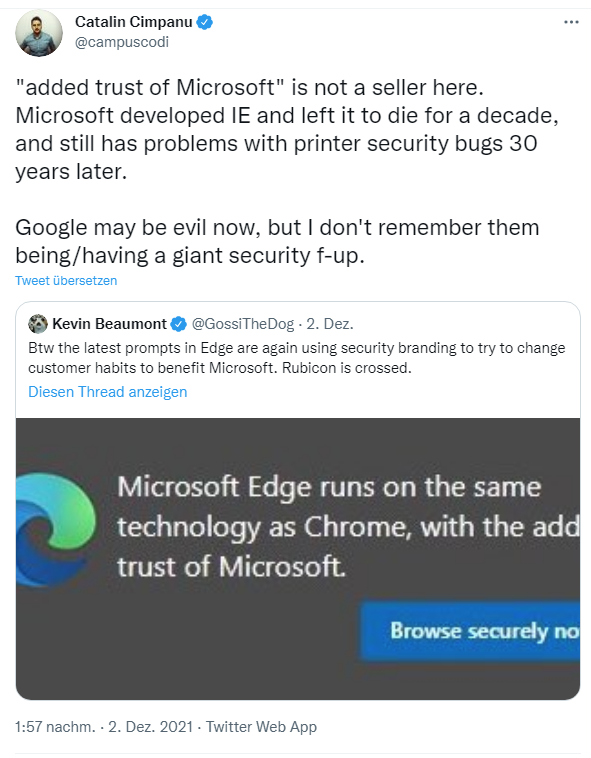 In the above tweet, two people pick up on Microsoft's latest dodge. Security researcher Kevin Beaumont, who incidentally was a Microsoft employee for a short time, thinks that the Rubicon has been crossed with this action. What he means is that Redmond is taking people for fools and trying to fool them into thinking that Edge is a Chrome with Microsoft's solidity, security and trust. IT author Catalin Cimpanu writes in the above tweet that the advertised "additional trust in Microsoft" is probably the joke of the century and as a "feature" makes a product almost unsaleable. So it must be some really good stuff that they are smoking in their cubicles in Redmond.

This entry was posted in browser, Windows and tagged Chrome, Edge, Windows 11. Bookmark the permalink.