[German]The security update KB5008212 distributed on December 14, 2021 for Windows 10 version 2004 to 21H2 has an unpleasant collateral damage. Anyone who has installed the update may find that Outlook Search no longer works afterwards. Microsoft has now acknowledged this problem. Here are some hints on the topic.

Bleeping Computer colleagues have now noticed a message in which Microsoft admits to problems with Outlook search after installing the update. 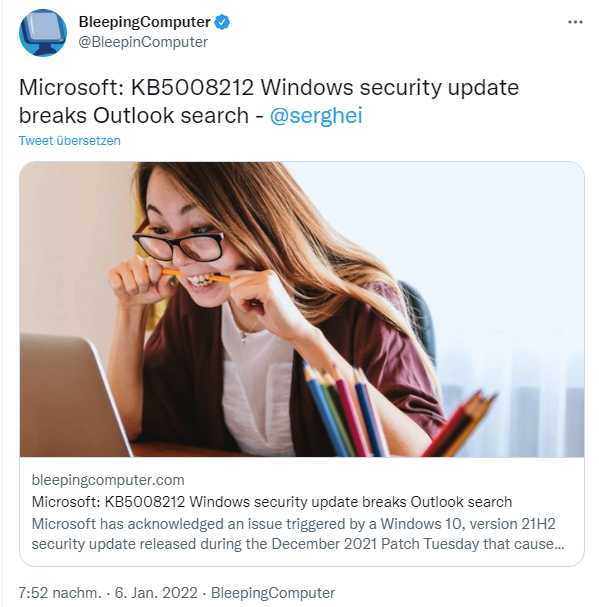 In the Techcommunity post Outlook Search not showing Recent Emails (December-2021), a user complains about problems with Outlook Search as early as December 25, 2021.

I had tried re-building the Indexing but it was same. Once the issue started I had searched for the solutions and finally found that recent Windows update has created the issue. I had uninstalled that particular update and the search issue was fixed.

So let us know when the fix will be available for this bug?

The error is confirmed by numerous other users. Microsoft is currently investigating the reason for the problem. Bleeping Computer describes a workaround in this article. Any of you affected?

This entry was posted in issue, Office, Update and tagged issue, Outlook, Update. Bookmark the permalink.