REvil ransomware Group took down in Russia by FSB

[German]The Russian Federal Security Service (FSB) has reportedly raided homes and arrested suspected members of the REvil ransomware group at the request of U.S. law enforcement. In the process, 500,000 euros and 600,000 US dollars in cash were seized. The whole thing must have happened yesterday, Friday, January 14, 2022 in various Russian cities.

Reuters refers to an FSB report, claiming, that members of the REvil ransomware gang have been identified. There were numerous arrests, and russian police raided at 25 addresses in Moscow, St. Petersburg, Leningrad and Lipetsk. Catalin Cimpanu, who reported on it here, posted a video of one such raid on Twitter. 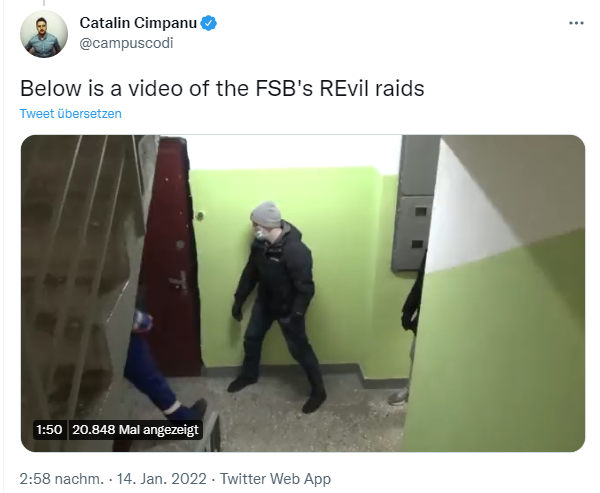 As many as 14 people have been accused of being members of the REvil ransomware group. One suspected member was identified as Roman Muromsky (see). The report does not indicate how many were actually arrested. Addendum: Bleeping Computer says 8 members are charged.

Some reports told, that the infrastructure was also taken down in the process. The whole action stemmed from a request by U.S. law enforcement. Since they are Russian citizens, there will probably be no extradition to the US.

The action is noteworthy because there was just a large-scale cyberattack on Ukrainian authorities whose websites were defaced(see). This is attributed to Russian hackers.

The REvil group has been responsible for numerous ransomware attacks against US companies and organizations, but also against victims outside the US. I had reported more often about their actions here on the blog. It had also been reported that their infrastructure had been shut down (see REvil Ransomware Group server and infrastructure is shut down). But the group became active again and disappeared again. Let's hope that this time it is more sustainable and the group has been dismantled.