[German]There are strange occurrences since February 24, 2022 in the signals of the Global Positioning System (GPS). The GPS signal has been disturbed in the Baltic Sea region and the Finnish government is now warning of incorrect GPS data. Several flights had to be recalled already. Here is some information, what is known to me.

GPS spoofing, not an isolated case

The falsification of GPS signals by jammers, sometimes called GPS spoofing, is already common practice. German Wikipedia cites the U.S.-registered NGO C4ADS, which documents a total of 9983 spoofing incidents between February 2016 and November 2018 in a report published in April 2019. In these cases, GNSS signals were deliberately jammed and distorted.

In my German blog I had the post Shanghai, die Geisterschiffe und das GPS-Spoofing (Shanghai, the ghost ships and GPS spoofing), which picked up an incident with ships in China (there is an article in English available yet). There, ship positions on Chinese rivers were displayed incorrectly – the ships were sailing ashore according to the GPS signal. It is suspected that jammers were used to disguise the position of ships illegally mining sand in the rivers.

And then there was the German Facebook post shown above from February 24, 2022 that I was informed about. A user had noticed that from 4:00 o'clock CET in the morning the GPS signal was faulty – and at 10:00 p.m. it was again. The person in question noticed this because a robotic lawnmower was sounding an alarm. I had then briefly researched the Internet, but could not find any further hits on the matter. February 24, 2022 is the date of the invasion of Ukraine by the Russian military. I found some articles saying, that GPS signal disruptions will become a billion-dollar risk for logistics.

A couple of days ago I came across a German article, that there is widespread interference with the GPS signal in the Baltic Sea region on the eastern border with Russia and the Baltic states. The article refers to a March 10, 2022 report Unusual amount of reports about GPS interference near the eastern border of Finland the Finnish transportation authority Traficom.

The Finnish Transport and Communications Authority Traficom has received numerous reports of GPS signal interference observed by aircraft. The disturbances started over the weekend (5/6 March 2022) and are still continuing. On Tuesday (8/3/2022), several aircraft reported GPS signal interference in the region around Mikkeli, Jyväskylä and Kuopio. A plane operated by Lithuanian airline Transaviabaltika has been unable to fly from Tallinn to Savonlinna for three days due to GPS signal interference on this route.

Flying is still safe. Airlines have procedures they follow in the event of a GPS signal loss. Aircraft can use other systems to navigate and land safely. Air traffic control assists pilots using other landing systems.

For the final approach, there are traditional approach systems that do not rely on a GPS signal. However, airlines decide for themselves whether they can operate in an area where GPS signal interference is known to occur. The german article linked above quotes a spokesman for the airline Finnair as saying, "Our pilots have detected GPS interference near Kaliningrad in recent days."  And the following tweet shows in an animation areas in the east where GPS navigation was disrupted. 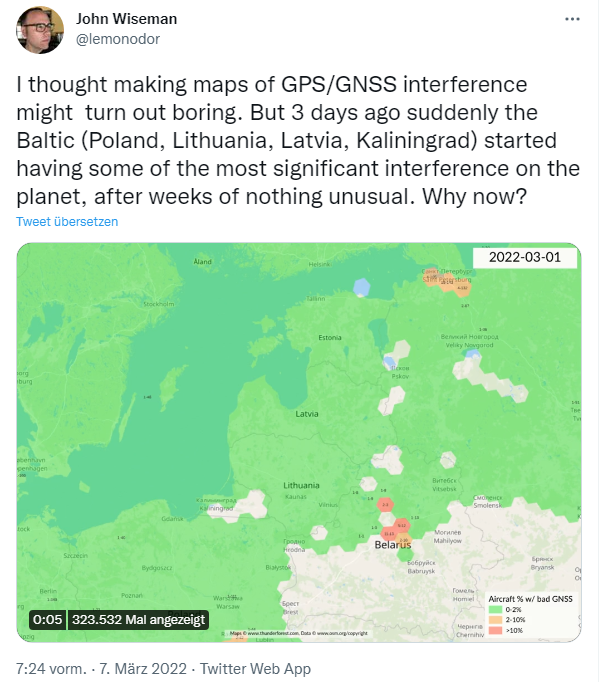 Traficom is unknown what is causing the interference. GPS interference is difficult to detect from the ground. It is easier aboard aircraft, and in the air, interference can be detected far from the source. GPS jamming can be transient and local, making subsequent verification more difficult. There may also be natural causes such as solar storms. Or the US military deciced to alter the GPS signals. The matter remains mysterious.

This entry was posted in issue, Security and tagged Security. Bookmark the permalink.