[German]Ukrtelecom, the largest fixed-line provider in Ukraine, was crippled for hours by a cyber attack, which also affected the internet. Furthermore, Ukraine has been responsible for botnet farms designed to spread disinformation since the beginning of the war. Military intelligence also exposed 620 employees of Russia's FSB intelligence agency and a BGP hijacking attack briefly diverted Twitter traffic to Russia.

Ukrtelecom  is the largest fixed line and internet telephone company in Ukraine. The following tweet refers to a Forbes report that the provider has been the victim of a cyberattack. 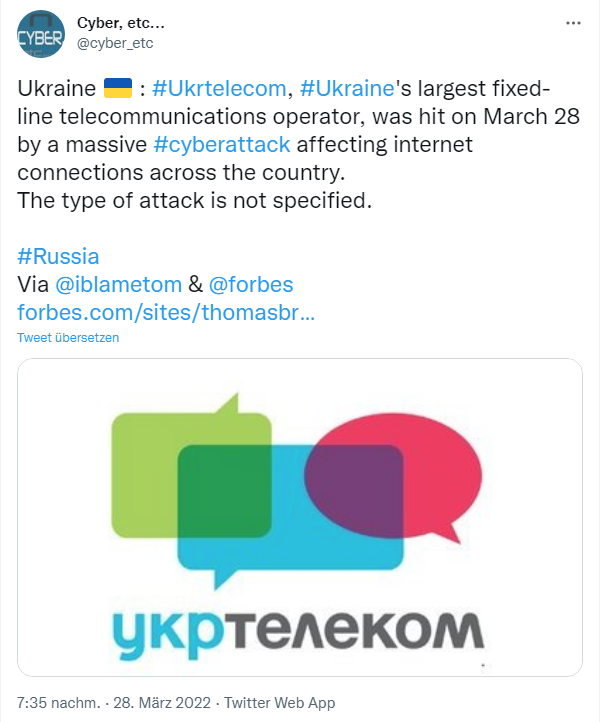 This most serious attack since the Russian invasion began has brought services of Ukraine's largest fixed-line telecommunications company to a nationwide standstill. The attack was only acknowledged by Ukrtelecom in responses to customer comments on Facebook. It admitted to Forbes that the government was investigating the attack. Details of the attack were not given. 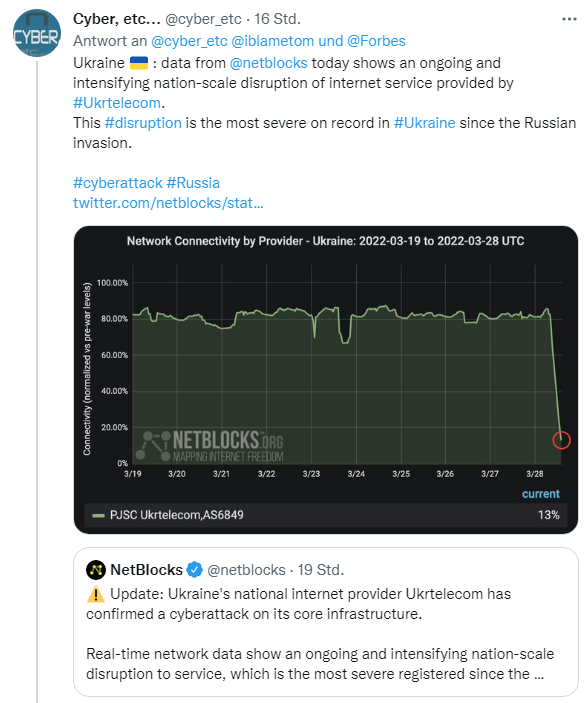 The tweet above shows the drop in connectivity. In the meantime, however, the problem seems to have been fixed again.

Colleagues at Bleeping Computer have just reported that five bot farms spreading disinformation have been smashed in Ukraine. Furthermore, 10,000 SIM cards were confiscated. 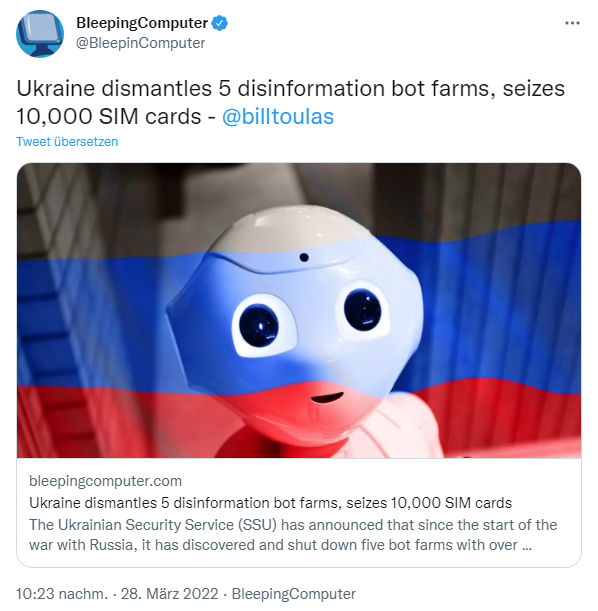 The information comes from the Ukrainian Security Service (SSU), which discovered and shut down the five bot farms with over 100,000 fake social media accounts spreading fake news since the start of the war with Russia. The botnet farms allegedly operated in Kharkiv, Cherkassy, Ternopil and Zakarpattia. According to the SSU, the five botnet farms were aimed at discouraging Ukrainian citizens and spreading panic. To this end, false information about the Russian invasion and the status of the defenders was allegedly spread. According to the SSU, the aim of the network was to destabilise the socio-political situation in various regions and thus to slow down the resistance of the Ukrainian militia. At this point, it should be noted that this information cannot be independently verified – but it is conceivable – and the article by colleagues gives further details and shows photos.

German blog reader mentioned it on this comment Ukraine's military intelligence published this list of (suspected) Russian intelligence operatives (FSB) on Monday (this is to unmask people – which goes under the term doxing). It lists 620 identities of people believed to be spies for Russia's domestic intelligence agency, the FSB. The list includes details of dates of birth, passports, SIM cards and cars. Bolko writes that the data originally came from the GIBDD database, where the Russian police record all vehicle owners. He says that Ukraine's military intelligence had the database filtered by "Lubyanka" to get the list. That is the address of the FSB headquarters in Moscow. In addition, Bolko writes:

In addition, the Yandex food delivery database (https eda[.]yandex[.]ru ) was hacked and names associated with Russian politicians were searched.

If you search for the (GIBDD) phone numbers of FSB agents in the Yandex food database, you will also find out some of their home addresses.

The case shows once again how transparent people, no matter in which country, have basically become.

German site heise reported, that there was a BGP hijacking case in which access to Twitter was temporarily redirected via Russia. 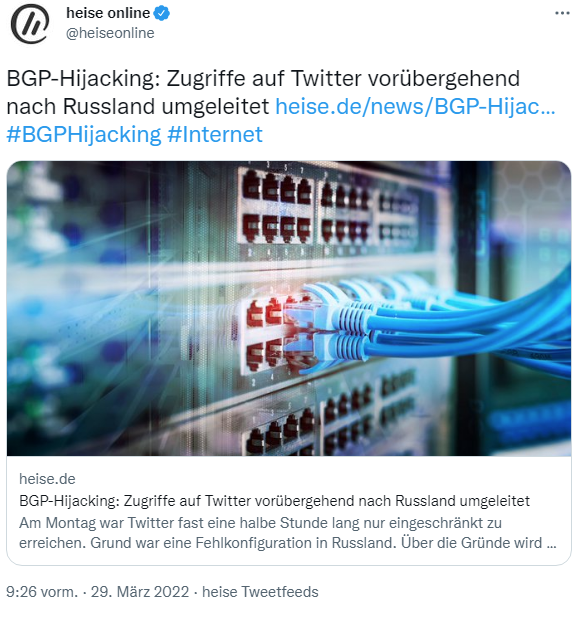