[German]The US Cyber in Infrastructure Security Agency (CISA) has recently added three more entries to its list of actively exploited vulnerabilities. Among them is the vulnerability CVE-2022-22718 in the Windows print spooler, which affects virtually all Windows versions that are still in support. Microsoft released a security update in February 2022 to close the Elevation of Privilege vulnerability in the Windows Print Spooler.

Vulnerability CVE-2022-22718  allows privilege escalation via the Windows Print Spooler service. Attackers who have local access to a Windows system can attack the Print Spooler service and elevate their privileges in the system without user interaction. Details of the vulnerability are being kept under wraps by Microsoft, but Redmond rates the complexity of an attack as low, meaning anyone who knows the vulnerability can easily exploit it via exploit. The CVSS score is rated as high at 7.2.

The colleagues from Bleeping Computer have pointed out in the following tweet  as well as in this article that the vulnerability is being exploited. 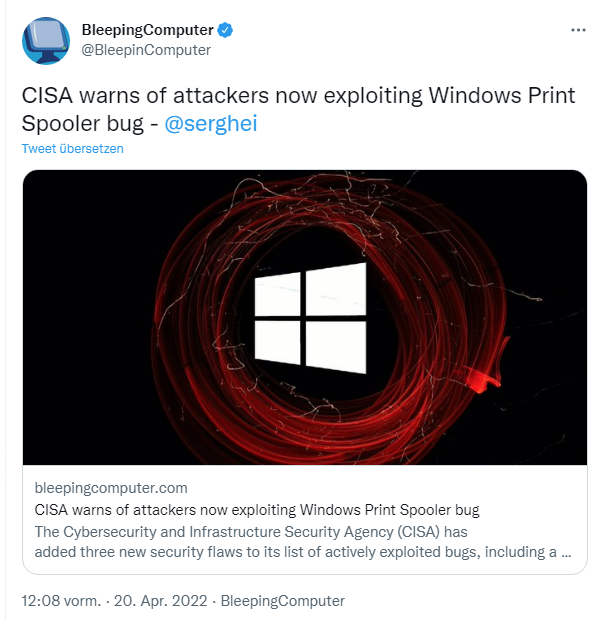 The background is that the U.S. Cybersecurity and Infrastructure Security Agency (CISA) has added the vulnerability CVE-2022-22718 to its list of actively exploited vulnerabilities as of April 19, 2022. U.S. organizations have until May 10, 2022, to patch this vulnerability.

Normally, one would assume that the February 2022 security updates for Windows have long since been applied. However, I remind you of my blog post Microsoft Februar 2022 Patch day review, where I pointed out various conflicts with the updates. So if necessary, check again whether the updates have been installed and react if necessary.