[German]Quick question for administrators in the enterprise environment who manage Microsoft 365 licenses (volume licenses, E3/E5). Are you currently experiencing problems with Windows Pro systems no longer activating or losing activation? I have received indications from the readership regarding this issue – and it is probably not an isolated case – may be a certificate issue.

I was contacted directly on Twitter by Fu Weissinger, who is affected and pointed me to the following tweet from Klaus, who described the issue: 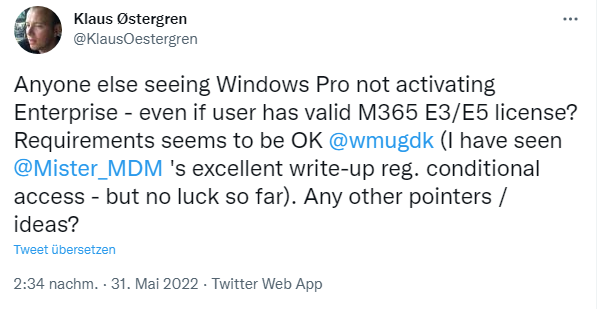 In the Enterprise environment, the machines lose their activation and are downgraded from Enterprise to the Windows Pro base license or cannot be reactivated with the Enterprise volume licenses (Microsoft 365 E3/E5 licenses). In the above case, it is now Windows 10 Pro 21H2 (build 19044.1706, activation via digital license). Fu Weissinger wrote me in a private message that he observes something similar in his environment.

Hello Mr. Born, we are currently experiencing Windows activation problems. Especially in combination with M365 Windows licenses, i.e. Windows licenses that are assigned on a per-user basis. It seems to me that a certificate on the MS side is no longer valid. Have you heard about this as well? I thought it was us first, via Twitter I have seen similar messages.

He posted the following on Twitter and suspects a problem with certificates based on the error message (because he gets the message when opening the license or check URL with a browser): 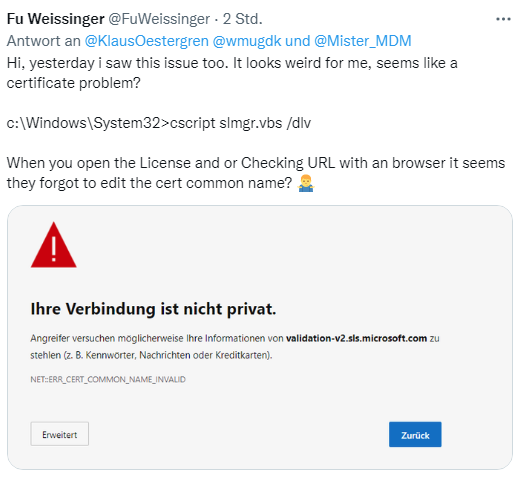 On Twitter, more users confirm these activation problems. Here are some messages:

Enrique Róo Moares: Hi Klaus, I have the same issues with different customers since friday. Did you move to the „New Commercial Experience" on the licensing side over the last weeks? We have devices in HAADJ and AAD only with the same issues and no luck so far with both write-up from @Mister_MDM

Martin Schmidl: Yes same for a customer… I think i checked all logs and executed all tasks there are.

Currently there a two more victims confirming that. Within my German blog, I got the following comment from a victim as an answer to my blog post.

yes 500 computer downgraded from Enterprise to Pro, almost freaking out.

Rudy Ooms has another article that describes the issue too. Receiving more and more similar feedback from German readers. Is anyone else affected?

Addendum: A German blog reader left a comment with a (temporary) workaround. He distributes a script with SCCM to affected Windows 10 Pro machines. The script has the following command:

German blog reader Tobias S. has escalated the issue via a partner to Microsoft  an got the following answer (thanks for that):

Hope you are doing good!

I already shared the case summary and my findings with PG. I will update you once PG team update me with the next set of action.

Also, as this is a known issue, we are getting high volume for the same, I do not have an ETA for the fix but based on the trend so far it might take 2 to 3 days.

This entry was posted in issue, Windows and tagged Issuce, Windows. Bookmark the permalink.

4 Responses to Microsoft 365: Activation issues with Windows Pro Enterprise (May 31, 2022)