The European Security Blogger Awards 2022 are run by UK agency Eskenzi PR, along with KnowBe4 and Qualys as sponsors – and I've been nominated before in 2021. The website here states:

The whole thing is a marketing thing, but I was pleased to see that I was nominated in 2022 two categories (see nomination Nomination for the European Cybersecurity Blogger Award 2022 – we are now underdogs). Here's one of the nominations (the second was for "The Tech Whizz"). 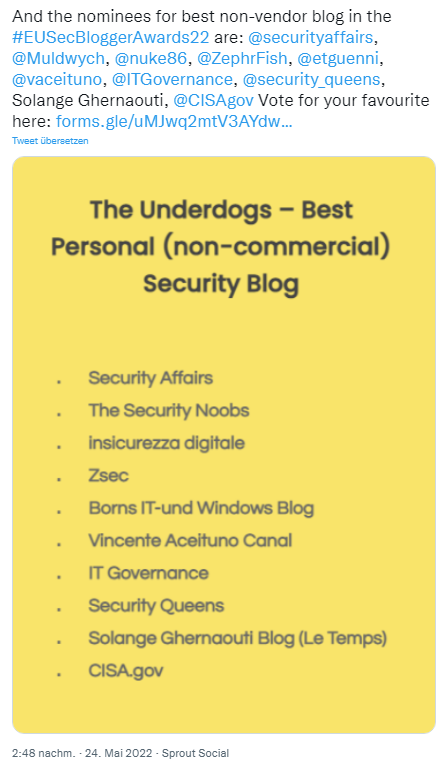 This year, for the first time, the award ceremony took place on site again. The website linked above states:

Attended by the dedicated and brilliantly talented cybersecurity blogger community, CISOs and a host of other industry VIPs, the annual awards ceremony is a must-attend networking opportunity.

After a brief virtual hiatus, the awards will be presented in person again this year! The awards ceremony will take place on the first evening of Infosecurity Europe on June 21 at the Tapa Tapa restaurant, just outside ExCel.

We hope to have around 120 attendees, which in the past have included Troy Hunt, creator of Have I Been Pwned, and other well-known bloggers such as Graham Cluley, Carole Theriault and Geoff White. Drinks and food will be provided, courtesy of our sponsors KnowBe4 and Qualys.

Well, I did get asked to come to London two days ago, but I didn't attend (since I broke my neck in March 2015 and suffers a spine injury, things and travelling just got a bit difficult, so I took a walk in the forest yesterday). But the following tweet came under my eyes on Twitter: 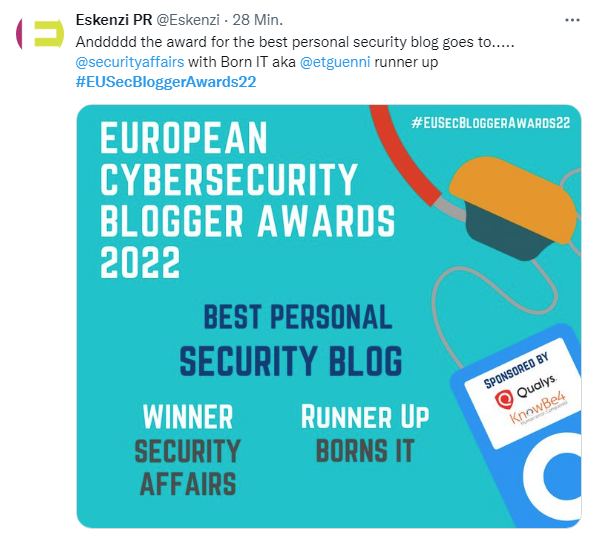 If I'm not completely off, Security Affairs by Pierluigi Paganini was awarded for the the best personal security blog, while the second place went to Borns IT und Windows Blog (it's the German sibeling of this blog here). I was also nominated in another category The Tech Whizz, and scrolling down brought me to the following tweet. 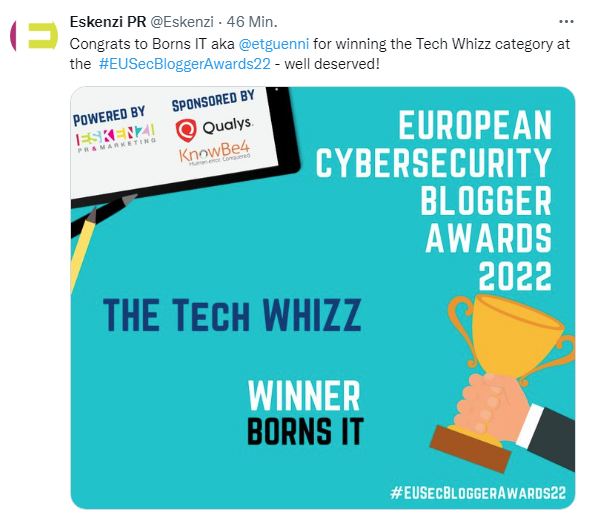 Looks like "The Tech Whizz" award went also to my German Borns IT- und Windows-Blog. Thanks to the blog readers who voted for my German blog- and of course my thanks go to the entire readership that has carried my two IT blog (German, English) this far for the last 15 years.