[German]The manufacturer Bizerba (scales), located in Baden-Württemberg, Germany, has become a victim of a cyber attack during the night of Monday (June 27, 2022). As a result of this attack, all IT systems of this manufacturer were shut down worldwide. Too many details are not yet known, as internal IT is working with forensic experts to examine how the attackers were able to get in. Employees and customers are said to have been informed about the incident.

I became aware of the facts, which were picked up by the German newspaper Schwarzwälder Bote here, via the following tweet. 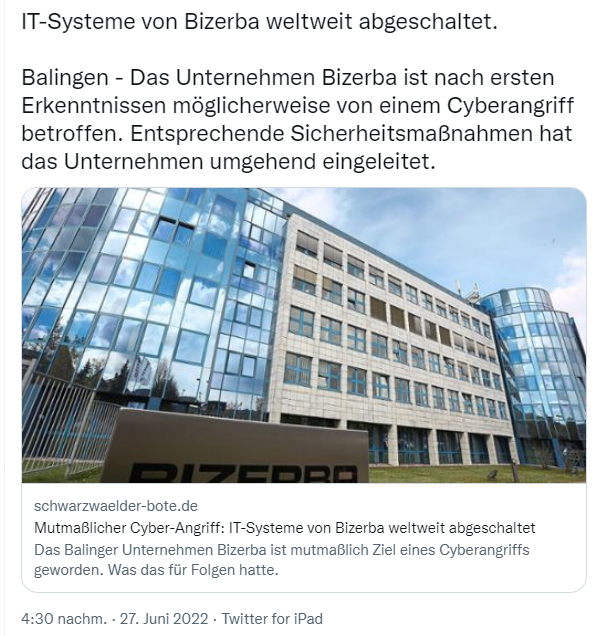 Not too much is known and the local press writes about a "suspected" cyber attack. What is certain is that the "attack" (possibly a ransomware attack) occurred on the night of Monday, June 27, 2022. As a result, emergency measures were activated and all IT systems worldwide were shut down and disconnected from the network.

Currently, internal IT is working with forensic experts to try to figure out what happened and how the attackers were able to penetrate the systems. All employees worldwide were informed on Monday morning (27.6.) and the company has initiated appropriate measures. Work with Bizerba IT systems is currently not possible or only possible to a very limited extent, the company said. In addition, all global customers, suppliers and partners were informed about the incident during the course of Monday, according to the linked article. However, I have not yet read anything about the cyber attack on the manufacturer Bizerba's website.

Bizerba SE & Co. KG is a major German manufacturer of scales headquartered in Balingen in Baden-Württemberg, Germany. The company also manufactures cutting machines, price labeling and marking systems, among other products. Bizerba is one of the largest employers in Balingen (the company had a total of 4,171 employees in May 2022 and made 701 million euros in sales). In addition to the plant in Balingen, Bizerba has production facilities in Meßkirch, Bochum, Shanghai and other foreign locations.