[German]apetito AG, a German baded food manufacturer (with international subsidiaries) of frozen menus, menu components and supplier for schools, daycare centers, hospital kitchens, has become a victim of a cyber attack. Nothing is working on their IT systems at the moment – apart from a concise information on the company website, the manufacturer has not communicated anything so far. Here is some information about it.

Yesterday German blog reader Jeremias sent me an email about the case, which should still make waves. Jeremiah wrote:

has been hacked (see screenshot). All server telephony is offline. Apetito is a provider of meals on wheels for hospitals, seniors and nursing homes.

Apparently they have been hacked. Food is delivered in the morning instead of at noon. Food cold. Clearly chaos, traceable. No info to customers (not comprehensible). On the website then the notice that they are completely offline because of hacking. Even telephony is not possible.

Apparently no disaster recovery concept. Crass. And no information to customers. A flyer on delivery of the food would be sufficient.

I just saw on the konbriefing page that the initial message about the attack must have appeared on the company website as early as June 26, 2022. The company's German website shows the following information (translated) about the cyber attack:

apetito has become target of a cyber attack. We currently have no access to our IT-supported systems, as our servers have been attacked. For this reason, among other things, orders are currently not possible.

Our top priority is to ensure the supply of clinics and senior citizen facilities as well as senior citizens at home by delivering replacement menus. A team of experts, both internal and external, is working flat out on analysis and solutions.

Unfortunately, it is not yet possible to predict when we will be available again. Customers can contact their responsible sales representative.

We ask for your understanding for the inconvenience. 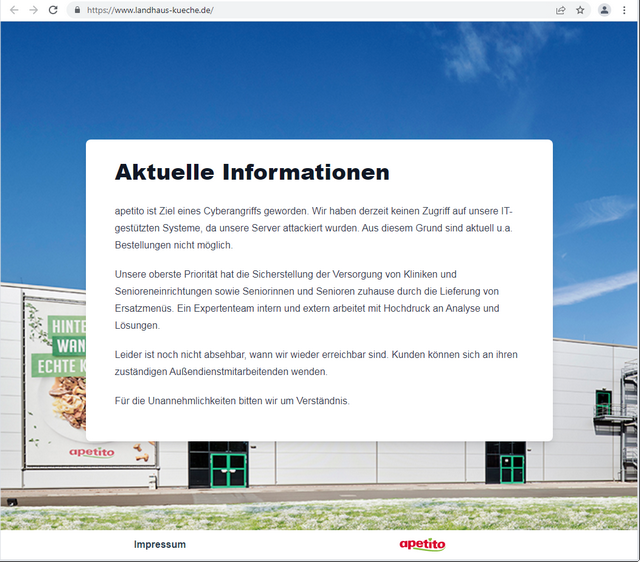 German media first reported on the incident on June 28, 2022. Tagesschau writes that "the kitchen in many schools, kindergartens, but also retirement homes or companies in Germany could remain cold "today". Apetito, a supplier of ready meals from Rheine, has been the victim of a hacker attack." MDR also reports here that no orders from Thuringia are possible. Currently, both the ordering system is unavailable – so the phone and email are also without function. Tagesschau says that the group benefited from the Corona crisis and therefore became the target of the attack.

This article confirms my suspicion that it was a ransomware infection that took place on June 26, 2022. This article reports "a sophisticated, criminal cyberattack." The UK unit said the incident occurred on Saturday (June 25). It says deliveries that were scheduled to be made in the U.K. by Thursday, June 30, 2022, will be delayed by a few days, and deliveries that were scheduled for the 1st and month after next will be made on time. Those who selected a menu for a free hot meal will receive their meal on time. However, not the one they chose, but the one the company will provide. Everything is expected to be back to normal by the weekend, as Microsoft's UK division will be undergoing a hardware and software overhaul by the end of the month. The foreign business units are probably able to provide more information than the German headquarters.

apetito AG is a manufacturer of frozen menus, chilled menus, menu components and catering concepts headquartered in Rheine, North Rhine-Westphalia, Germany. The group of companies includes apetito AG with subsidiaries in Germany, the Netherlands, Great Britain and Canada as well as the sister company apetito catering. The company achieved annual sales of 1.01 billion euros in 2021 and employed 11,775 people worldwide.

Apetito offers frozen and chilled menus and menu components as well as catering concepts. The company supplies daycare centers, schools, companies, clinics, senior citizen facilities and meals on wheels. In addition, apetito is represented in food retailing as a producer of frozen meals with the brands apetito, MinusL (a cooperation with the brand owner OMIRA) and Costa in German retail outlets and in Internet sales.