[German]Security vendor Kaspersky has come across a little-known backdoor, undetected by antivirus solutions, that leaves malware on Microsoft Exchange servers in the IIS module. There are infections of the so-called SessionManager backdoor in Exchange systems worldwide. The SessionManager backdoor enables a wide range of malicious activities, from collecting emails to taking complete control over the victim's infrastructure. The newly discovered backdoor was first deployed in late March 2021 and has hit government and non-government organizations in Africa, South Asia, Europe and the Middle East. Most of the organizations attacked remain compromised to this day. 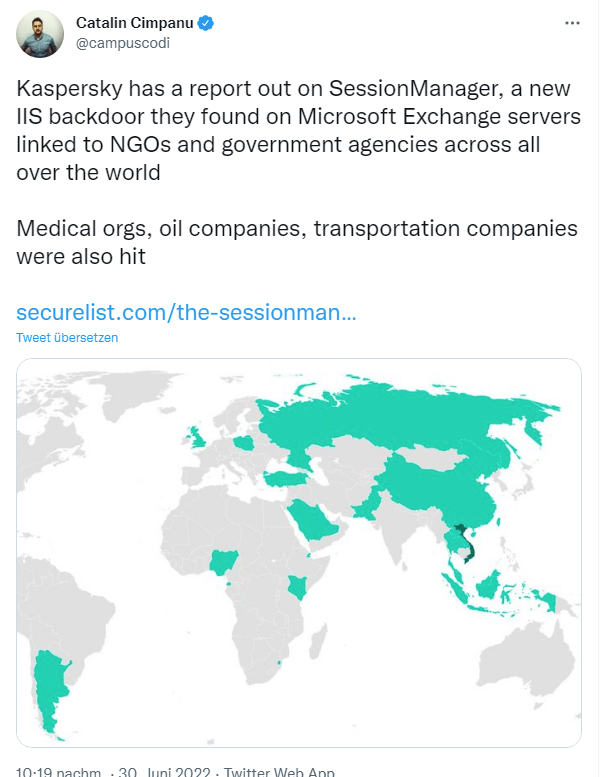 The current trend is for cybercriminals to attempt to implement a backdoor in the IIS of Exchange servers in order to then launch their activities. Back in December 2021, Kaspersky discovered "Owowa", a previously unknown IIS module that steals the credentials a user enters when logging into Outlook Web Access (OWA). Since then, Kasperky experts have been on the lookout for similar backdoors that exploit one of the ProxyLogon vulnerabilities in Microsoft Exchange servers. During a recent investigation, Kaspersky experts came across a new unwanted module backdoor called SessionManager.

The SessionManager backdoor allows threat actors to gain persistent, update-resistant and rather unobtrusive access to a target company's IT infrastructure. Once injected into the victim's system, the cybercriminals can use the backdoor to access corporate emails, update further malicious access by installing other types of malware, or secretly manage compromised servers that can be used as malicious infrastructure.

Due to certain similarities and the use of the common "OwlProxy" variant, Kaspersky experts assume that the malicious IIS module was used by the GELSEMIUM threat actor as part of its espionage operations. Details and recommended actions can be found in this Kaspersky article.