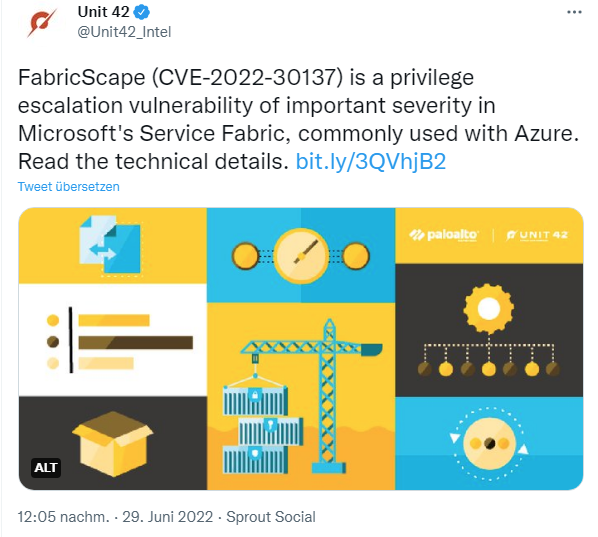 here is a second post Uncovering FabricScape that summarizes the details somewhat. Security researchers at Unit 42 identified a vulnerability of significant severity in Microsoft's Service Fabric with FabricScape (CVE-2022-30137). The software is commonly used with Azure – and the vulnerability allows Linux containers to escalate privileges. This allows root privileges to be gained on the node, and the attacker then has everything they need to compromise the nodes in the cluster. The vulnerability could be exploited on containers configured for runtime access, which is granted to every container by default.

Service Fabric hosts more than 1 million applications and runs on millions of cores daily, according to Microsoft. It powers many Azure offerings, including Azure Service Fabric, Azure SQL Database and Azure CosmosDB, as well as other Microsoft products such as Cortana and Microsoft Power BI.

Using a container controlled by the security researchers to simulate a compromised workload, they were able to exploit the vulnerability in Azure Service Fabric. However, some other attempts to exploit the vulnerability in Azure offerings based on managed multi-tenant service fabric clusters failed. The background is that Microsoft disables runtime access to containers of these offerings.

Palo Alto Networks security researchers worked closely with Microsoft (MSRC) to fix the issue. The vulnerability was fully fixed on June 14, 2022. Microsoft released a patch for Azure Service Fabric to address the issue. The patch has already mitigated the issue in Linux clusters. In addition, internal production environments of offerings and products powered by Service Fabric have also been updated.

Although there are no known attacks in the wild that have successfully exploited this vulnerability, organizations are strongly advised to take immediate action to determine if their environments are vulnerable and quickly implement patches if necessary. Details can be read here.

This entry was posted in Security and tagged Azure, Cloud, Security, Software. Bookmark the permalink.