[German]Today another finding from the internet about Windows 10 (11) troubleshooting, where the error was caused by an app. Suddenly the Windows Start menu stopped working, OneDrive reported an error, and Outlook was also causing problems. At the end of the day Rudy Ooms found the culprit, it was the app ClickShare from Barco. I found it quite interesting how Ooms investigated and documented the whole thing and am posting the short version here on the blog for your information.

Rudy Ooms is an MVP from the Netherlands who probably works as an IT service provider for various customers. I had already picked up on a problem described by Rudy Ooms here on the blog in the article Still wipe issues when resetting Windows 10 (20H2 – 21H2) and Windows 11. The days I stumbled across the following tweet from Ooms, in which he addresses another Windows 10 issue. 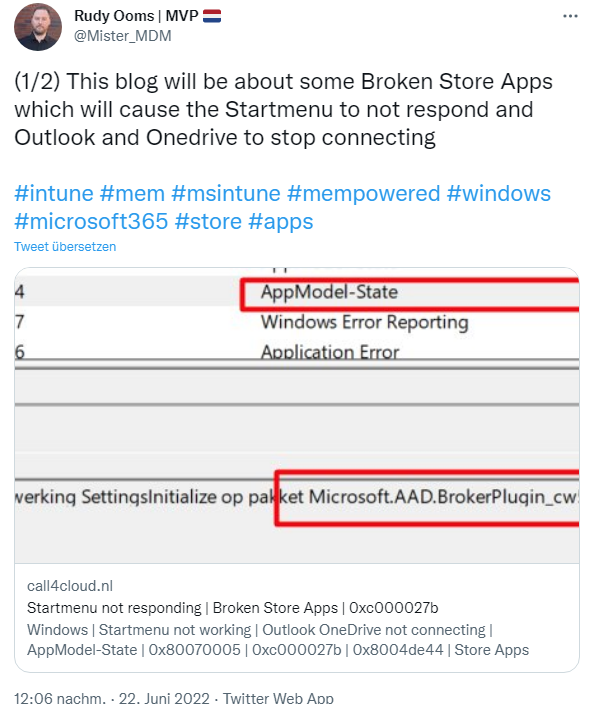 He describes that he encountered an issue where Store Apps fail on Windows (10) with errors like 0xC000027B etc. The issue occurred with customers and he outlines the following error pattern:

There were Windows updates (e.g. May 2022) which caused some problems. But Ooms writes that he noticed the problems with broken Store apps outlined above as early as February 15, 2022.

In his blog post The Adventures Of the Broken Store Apps Across The 8th S-1-15-2-1, Rudy Ooms analyzes how he got to the root of the problem, how he fixed it, and what caused it. To analyze what was going on, Ooms inspected the Event Viewer entries for error messages related to the problems. In the Event Viewer, he then found an entry of the type:

where the repair of a package was attempted, but failed. Upon further analysis, which he documented in the blog post, he writes that the error code 2147024891 | 8007005 stands for an Access Denied error. Something corrupted the access rights for the Store apps and thus also for OneDrive and Outlook as well as the Start menu.

At first, to repair the approach, we tried to delete the broken user profile in the registry. After that, OneDrive and Outlook could be logged in again and successfully. But there was still the question what caused this effect. An analysis revealed that a read permission was missing for all affected Store apps and Explorer shell components. In the blog post, he presents scripts that he used to fix the permissions.

But more interesting is the cause of these broken permission entries. After comparing various Windows systems that were affected with unaffected systems, one cause crystallized. Barco's ClickShare app had been installed on all of the affected machines.

ClickShare is a solution from Barco that automatically connects a notebook to room cameras, speakers and soundbars wirelessly. With just one click, users can wirelessly share a screen or start a video conference. The solution is likely to be in use in some companies.

According to Rudy Ooms, Barco has also admitted that their app is causing these problems and fixed the whole thing with the latest update. So, those who are experiencing such issues should make sure that their ClickShare app is up to date. For those affected by this issue, check out the post The Adventures Of the Broken Store Apps Across The 8th S-1-15-2-1 for more details on how to fix it. On Twitter, someone else has come forward with similar issues with the Palo Alto Cortex solution.

This entry was posted in issue, Software, Windows and tagged App, issue, Windows 10. Bookmark the permalink.