[German]Users of Windows 11 (22H2) as well as Windows Server 2022 should pay attention if they run a RAID system and use the Adaptec ASR-71605 RAID controller for it. A blog reader pointed out to me a nasty bug in the driver in question from Microsoft that seems not to have been fixed yet. Here is some information about it.

I had a quick look, the Adaptec ASR-72405 controller can be found at various sellers like Amazon, eBay etc., but it costs several hundred Euros (about 300 to 500 Euros). 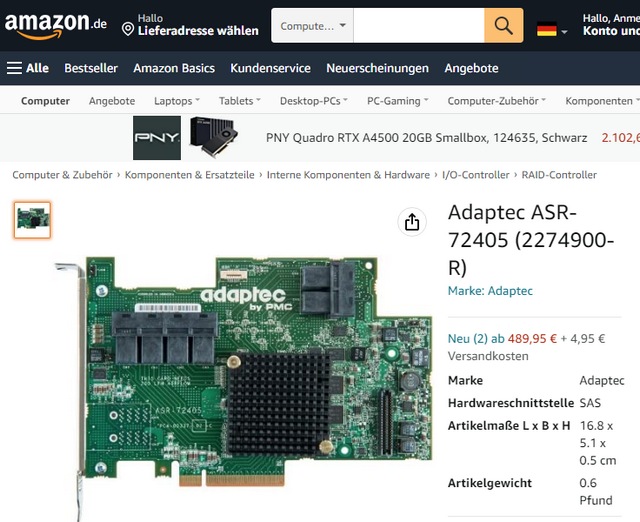 The driver is causing problems

Blog reader David Xanatos contacted me by email the other day and reported problems he is having with the Windows drivers for this raid controller.

A strange incompatibility got in my way the days. The drivers for Adaptec ASR-71605 RAID controller and related models like ASR-72405 have a bug on Windows Server 2022 like Windows 11 (22H2).

When waking up the system from hibernation or standby the RAID drives are not working anymore (100% load indication, although they do nothing, every access attempt runs into a timeout). But sometimes (very rarely) the drives go with extremely reduced performance. And sometimes the driver simply triggers a BlueScreen (BSOD).

This is of course especially annoying when you have 5 such controllers in use :(

Since these controllers are already somewhat older and remedy on the part of Adaptec is rather not to be expected, I would like to push the problem very gladly MSFT. After all, they have changed something in the kernel [of Windows 11/Server 2022), which now results in this error. So they did it, now they should fix it.

Do you think it would be possible to bring this bug to their attention, in the hope that it might actually be fixed by Windows?

Regarding the last sentence: I am skeptical – but I will report the article in the English edition to MS-Help via Twitter. Anyone else from the readership who is confronted with the problem?