The first report I received via Twitter. The person in question thinks that Microsoft has once again ruined Access with an Office update and posted the following screenshot of the error message in a tweet – the German text means translated: 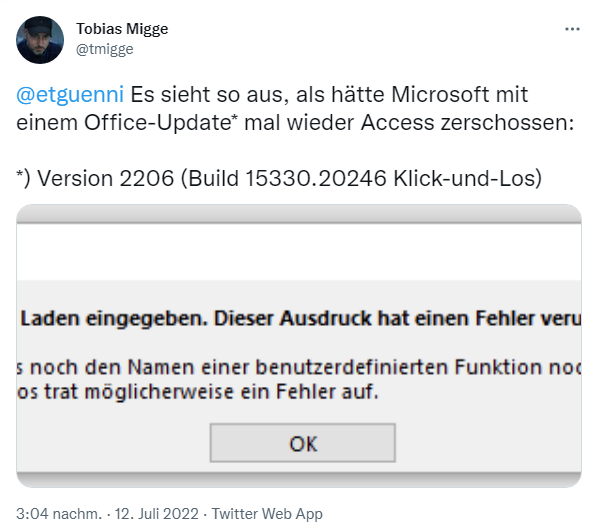 You have entered the expression On Load as the event property setting. This expression has caused an error: Requested class library or wizard is not a VBA project.

If you search for the bug, there are quite a few hits – and a support post from April 2022. From the post, I conclude that there was either a reference to a library disabled (you can find out in the VBA environment) or a reference broken by the update. Anyone else who happens to have this bug and can elaborate? The user replied on Twitter:

The error occurs with our customers who have installed update 15330.20246. It disappears when you revert to 15330.20230 OR create a new ACCDE with the newer Access version. This will then run on both builds, but not on older Office versions. By this I mean Access 2013 or 2010.

So it seems to be related to the latest update. However, the user also points out that build 15330.20246 is not yet listed in the Microsoft 365 update history. At this point, my thanks to the reader for the information.

A short time later I received the notification within the following tweet, that an installed Access Run Time (RT) also seems to show these errors. 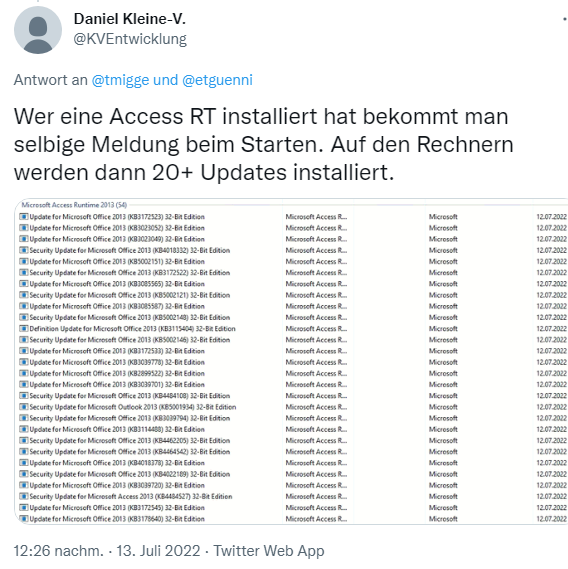 In another tweet, the first user reported, that the error occurs after installing Office 2013 update KB5002121 or Office 2016 update KB5002112. In all cases, the Access error in Run Time or in Access apps accessing ACCDE files has been gone, after the update install has been rolled back.

Addendum: Microsoft says, they are aware and the team is looking into that issue (some affected German blog reader had created tickets). On reddit.com there is this thread about that issue.

This entry was posted in issue, Office, Update and tagged Access, issue, Update. Bookmark the permalink.