[German]On Monday, August 8, 2022, the Danish supermarket chain 7-Eleven has fallen victim to a cyberattack. As a result of this cyberattack, the chain had to close all 175 stores in Denmark on August 8, 2022. On Thuesday, August 9, 2022, some stores are reopened.

Bleeping Computer colleagues have published the following screenshot from the company's Facebook page about the cyber incident. 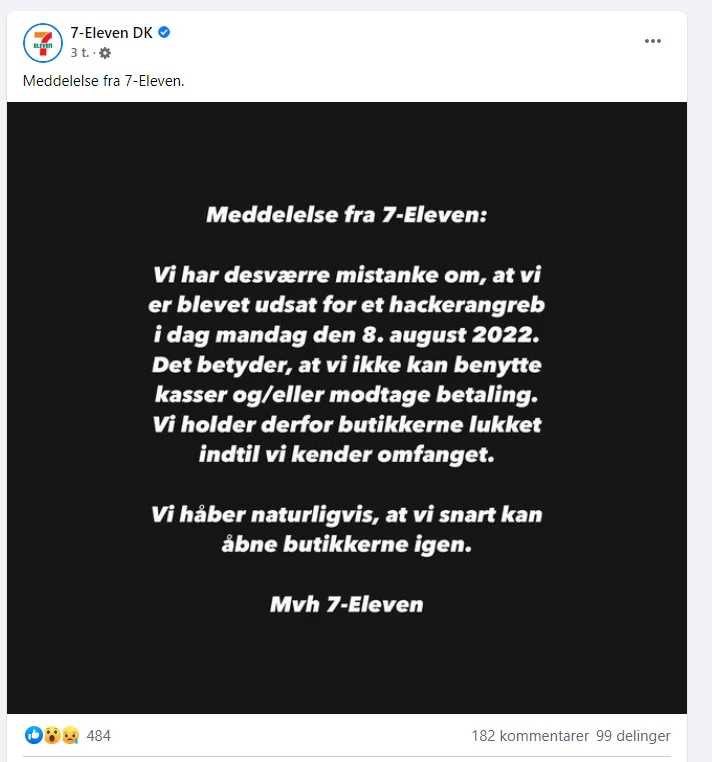 The incident occurred already on August 8, 2022 in the early morning. From 7-Eleven Denmark it says:

Unfortunately, we suspect that we have been subjected to a hacker attack today, Monday, August 8, 2022. This means that we cannot use cash registers and/or receive payments. We are therefore keeping the stores closed until we know the extent. Of course, we hope to reopen the stores soon.

Employees confirmed the incident on social media and on reddit.com, as reported by colleagues from Bleeping Computer. This Danish medium writes that the stores are slowly reopening. So far, its five stores reopened, although for now only payments in cash or via a mobile app were accepted there. Who is behind the attack has not been communicated yet. The whole thing reminds me of the Coop incident in Sweden (see Coop-Sweden closes 800 stores after Kaseya VSA supply chain attack by REvil gang).

7-Eleven is a US company, based in Irving, Texas, which operates more than 77,000 stores worldwide, either directly or under license. In Denmark, there are 175 stores.

The company is arguably a more frequent target of successful cyber attacks. In 2019, a vulnerability in an app was abused to siphon off $500,000 (see). A week ago, there was an incident in Taiwan in which 7-Eleven advertising displays displayed the message "Pelosi, get out of Taiwan." And in 2019, there was a scandal because the chain recorded and stored customers' faces on camera without their consent.