[German]Users who want to install an Insider Preview of Windows 11 or a Windows Server 2022 under VMware Workstation and run it virtualized are currently running into a problem. The installation of the guest operating system aborts with a green screen (or blue screen) and the error message UNSUPPORTED_PROCESSOR. The cause is Microsoft's modifications for Hyper-V – but there are workarounds.

I already came across the problem reported by a user at the colleagues of deskmodder.de some days ago. The following tweets show the problem. Joseph Lee writes that the VMware guest fails with the UNSUPPORTED_PROCESSOR stop code, when installing Windows Server 2022 Build 20348.946 (KB5016693) for example. 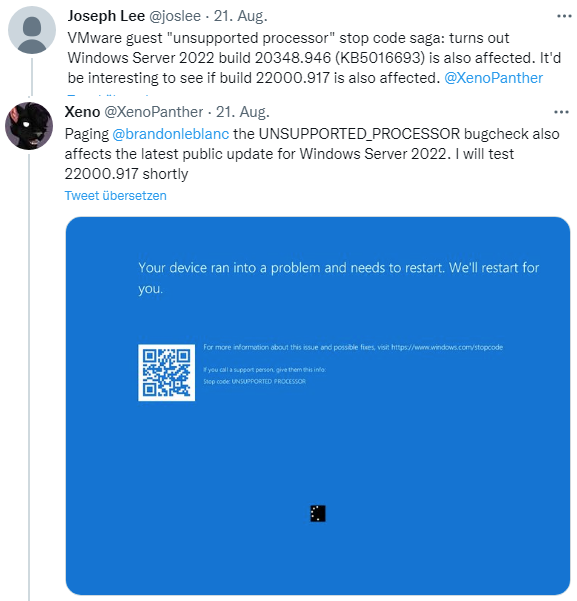 In the above tweet, Xeno shows a blue screen of a production version of Windows Server 2022, but it also seems to happen with Windows 11 Insider Preview builds – the colleagues from deskmodder.de have shown a corresponding green screen. Affected are probably Windows 11 25179 or 25182 or Windows Server 2022 20348.946. Cause are modifications of Microsoft for Hyper-V, which collide with VMware. Windows safe mode does not seem to trigger this stop code.

Xeno then found a simple workaround using the ntoskrnl.exe file from build 25174. Xeno suspects it is due to the new kernel debugging features added in build 25179. 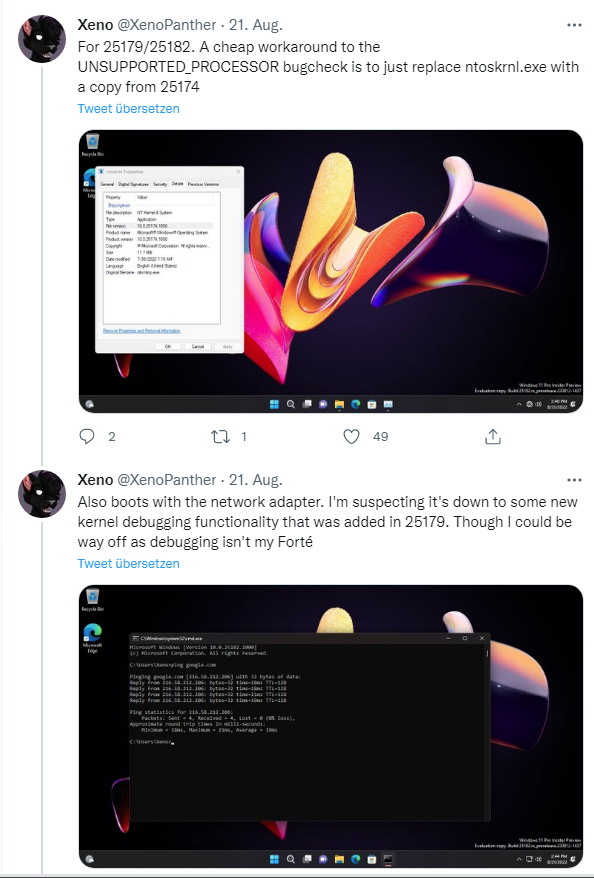 The colleagues from deskmodder.de describe the workaround a bit more extensively here. To be able to install Windows 11 or Windows Server 2022 as guest operating systems in the virtual machine under VMware Workstation, the VM must be terminated after the first restart. In the options of the guest operating system under CPU e.g. Number of processors and Number of core per processors the value 1 has to be set.

Then the guest operating system should be installed. However, according to deskmodder.de, the problem is that at least two cores are required to update from Windows 11 build 25179 to build 25182. To get out of this construction site, one can replace the guest's ntoskrnl.exe with the following steps.

On deskmodder it is still said that this solution is valid until September 15, 2022 – then the Windows 11 signature expires. It might be funny with the virtualization of Windows 11 and Windows Server 2022. With third party solutions you run into problems more often and with Hyper-V it can happen that a bug prevents you from using it.

This entry was posted in Windows and tagged issue, Virtualization, Windows. Bookmark the permalink.