Google announces Pixel event to be held on October 6, 2022

[German]Google has posted an invitation for October 6, 2022. New smartphones and a smartwatch are shown in an animation. It is assumed that a Pixel 7 and a Pixel Watch will be unveiled. 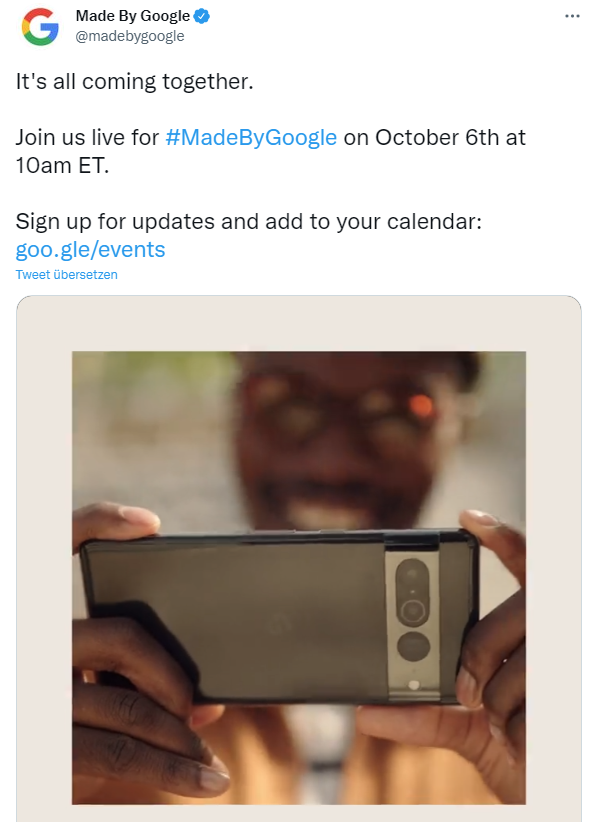 The invitation page states that you should reserve October 6, 2022 at 10 a.m. ET in your calendar. The latest Google Pixel device portfolio will be officially presented during a live event. Specifically, Google mentioned that the so-called lineup will include the Pixel 7, Pixel 7 Pro, and thee Google Pixel Watch. Google will also announce additions to the Nest smart home portfolio, it said.

All the devices will be available on GoogleStore.com on the same day for users in the US, UK and Australia. Those who want to watch the event can watch the livestream on YouTube.

During the keynote at Google I/O in May 2022, the Pixel 7, Pixel 7 Pro and Google Pixel Watch had been unveiled for the first time. The Pixel 7 smartphones ship with Android 13 and are equipped with the next generation of Tensor. Tensor is a mobile chip customized by Google for the devices, offering even more helpful personalized features for photos, videos, security and voice recognition.

The Google Pixel Watch is the first smartwatch designed and manufactured by Google. With the SmartWatch, Google is looking to bring together Fitbit's health and fitness expertise with a product of its own. The Watch gets a new, revamped WearOS interface that is compatible with all Pixel and Android phones, as well as the Pixel Buds Pro and Pixel Buds A-series wireless earbuds.

This entry was posted in devices and tagged Smartphone, Smartwatch. Bookmark the permalink.