[German]Brief note for administrators who use Microsoft Endpoint Manager to manage mobile devices. Microsoft has just announced that iOS/iPadOS 15 devices that are logged in with a user registry cannot be successfully updated to iOS 16.

On  Monday, September 12, 2022, Apple will indeed release iOS 16 for newer iPhone models – I had reported in the post iOS 16: Release on September 12, 2022. Now the following tweet has come to my attention, which warns about problems when upgrading to iOS 16 if Microsoft Endpoint Manager is used. 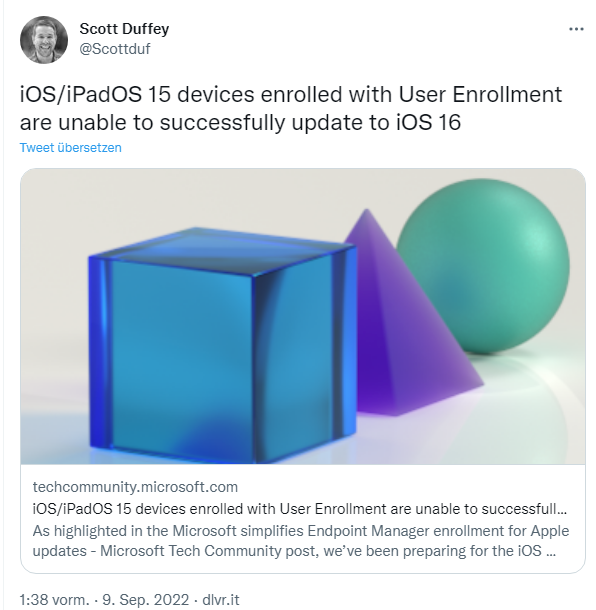 Microsoft's Intunes team goes into details in the post  iOS/iPadOS 15 devices enrolled with User Enrollment are unable to successfully update to iOS 16. The team has tested every beta of iOS 16 so far and recently encountered an issue. Both Intune and Apple are working on updates, but there is no solution yet.

The device enrollment date can be viewed in the Microsoft Endpoint Manager Admin Center. To do so, go to Devices > iOS/iPadOS and view the Enrollment Date column on the Overview page. For a current iOS device, the enrollment date can be viewed under Settings > General > VPN and Device Management -> Management Profile. It is necessary to check when the device identity certificate expires. If this is between September 2022 and September 2023, the device is likely affected (most customers use a one-year certificate).

Microsoft has posted IT428176 in the Service Health Dashboard for affected devices. When an affected device is upgraded from iOS/iPadOS 15 to iOS/iPadOS 16, the user receives the error message "New MDM payload does not match old payload." At the device level, the enrolled devices cannot update their management profile. If the management profiles are not updated, the device may lose compliance, which may block access to enterprise resources, depending on your policies.

The Intune team plans to release a fix by September 16 that will be fully rolled out across the Intune environment. Apple is working on an update for iOS/iPadOS 16, though it is unknown to Microsoft whether this will be released with 16 or 16.x. Microsoft wants to inform if there are any news about that issue.

This entry was posted in ios, issue, Software and tagged iOS, iPhone. Bookmark the permalink.