[German]Game developer Rockstar Games was hacked. Now a user on GTAForums has posted 90 video taken from a test build of Grand Theft Auto 6. The hacker also claims to have the source code of GTA 5 and 6. The hack and leak is aimed at blackmailing game developer Rockstar Games, with the hacker also claiming to be behind the attack on Uber (see Ride share service provider Uber investigates hack (Sept. 2022)).

The site PC Gamer reported about the publications on GTAForums here. Forum user 'teapotuberhacker' has posted 90 videos purportedly from a test build of Grand Theft Auto 6. The videos are said to have been created using the source code of "GTA 5 and 6 and their associated assets". 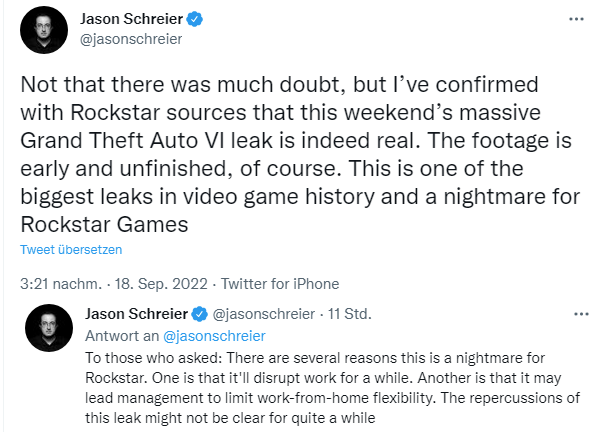 Jason Schreier, a reporter at Bloomberg, writes in the tweet above, that he has had Rockstar sources confirm the authenticity of the videos. The massive Grand Theft Auto VI leak from the weekend is real.

Copies of the videos are now being passed around on platforms like YouTube, Twitter, reddit.com, etc. – though Rockstar Games is having the posts deleted, I've seen. The information from the videos matches the details from the recent leak about GTA 6 and an earlier leak. It suggests that multiple playable characters, including a woman, are planned in the game. Much is reminiscent of the earlier game Vice City. However, it is a game that is still in a very early stage of development and is unfinished, he said.

Nevertheless, this is a nightmare for Rockstar, as they will surely stop working on the games for a while – they will put everything to the test. Another reason for very negative consequences incident is: also at this company many developers work in home offices, which of course now comes under scrutiny. More reports about the leak can be found on The Verge or at Bleeping Computer. 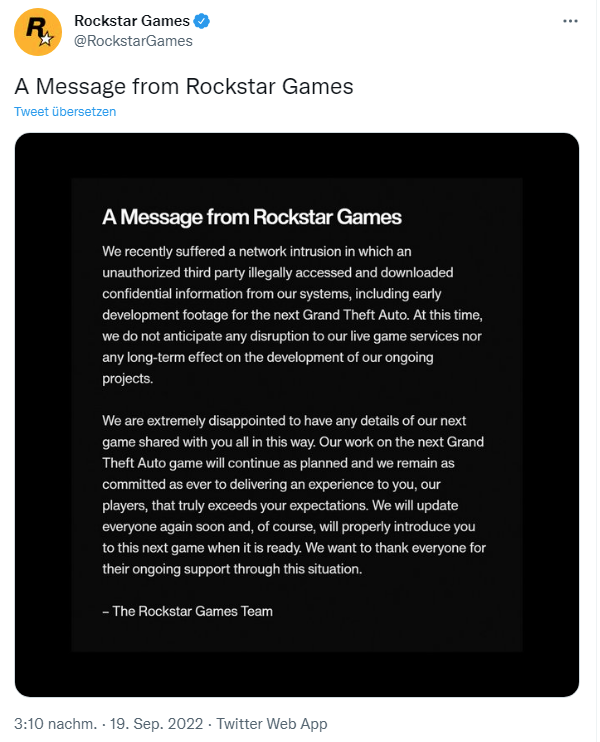 Addendum: Rockstar Games has confirmed the hack, see the tweet above.