[German]There is a critical remote command execution vulnerability (CVE-2022-36804) in the version management for software development projects, Atlassian Bitbucket. Atlassian had already published a security advisory and a product update for the vulnerability, which was rated critical, at the end of August 2022. Now the discoverers seem to have released details about the vulnerability.

Atlassian Bitbucket  is a web-based online version management service for software development projects. The service was originally developed as a Mercurial-only system, but added support for Git on October 3, 2011. Wikipedia states that over 330,000 teams of over 2.5 million developers were working with Bitbucket in 2014 – I don't have more recent data.

A command injection vulnerability exists in multiple Bitbucket Server and Data Center API endpoints. An attacker with access to a public repository or with read access to a private Bitbucket repository can execute arbitrary code by sending a malicious HTTP request.

Just came across the tweet linking to the article Breaking Bitbucket: Pre Auth Remote Command Execution (CVE-2022-36804 from assetnote.io. In a blog post dated September 14, 2022, their security researchers disclose the details of this vulnerability. 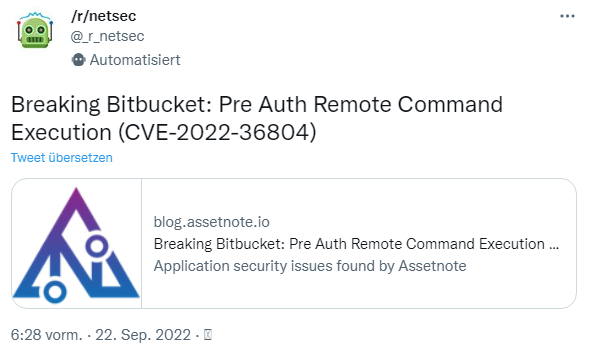