[GER]Small addendum from this week: Google has introduced a new Chromecast model with support for Google TV (HD). With a Chromecast stick, you can stream wirelessly from a device (Android smartphone, desktop PC with Chrome browser) to a connected TV. 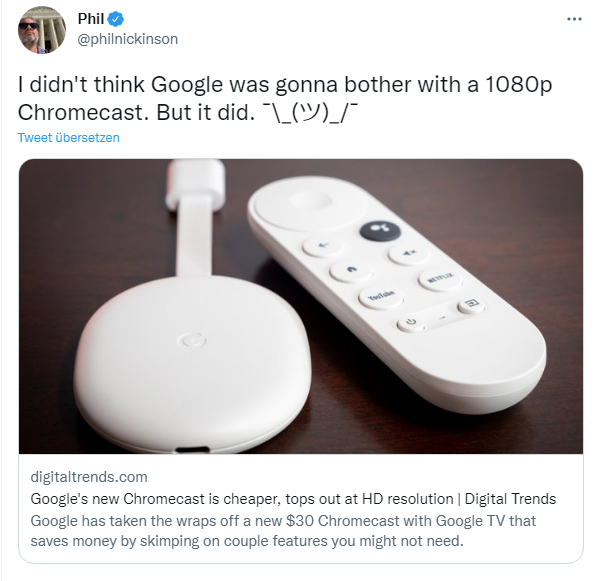 Chromecast with Google TV (HD) is supposed to cost $30 in the US. The Chromecast comes with a remote control (earlier Chromecast models were operated via smartphone) and is supposed to have features of the 4K model available for $50 (see the comparison on this Google page). The remote may eliminate the need for Android smartphone operation, though that option is still available. Compared to the 4K model, the resolution on the Chromecast with Google TV (HD) is limited to 1080p (albeit with HDR support). The new model is said to have 1.5 GB of RAM. However, it is not so clear to me where the buyer base for this Chromecast is supposed to be – it is more expensive than Amazon's cheapest Fire TV stick for 30 Euros.

This entry was posted in devices and tagged Chromecast. Bookmark the permalink.