[German]Since Monday, October 17, 2022, many Metro stores worldwide have been struggling with severe IT problems. I had already suspected a cyber attack on the Metro Group in a post and I had reports from Austria, from France as well as comments from German Metro customers as well as employees. However, a cyber attack remained unconfirmed so far. Now Metro AG has confirmed such an attack to heise – and on its website.

Metro Group with IT problems

I had already reported about the IT problems at Metro Group in the blog post Cyber attack on Metro AG or just a IT break down? Austria, France, German (and more countries?) affected. Since Monday, October 17, 2022, Metro wholesales stores have been struggling with massive IT problems. No invoices or daily passes could be issued and online orders had also disappeared, Metro customers reported. A blog reader had provided me with the following photo of a Metro notice board. 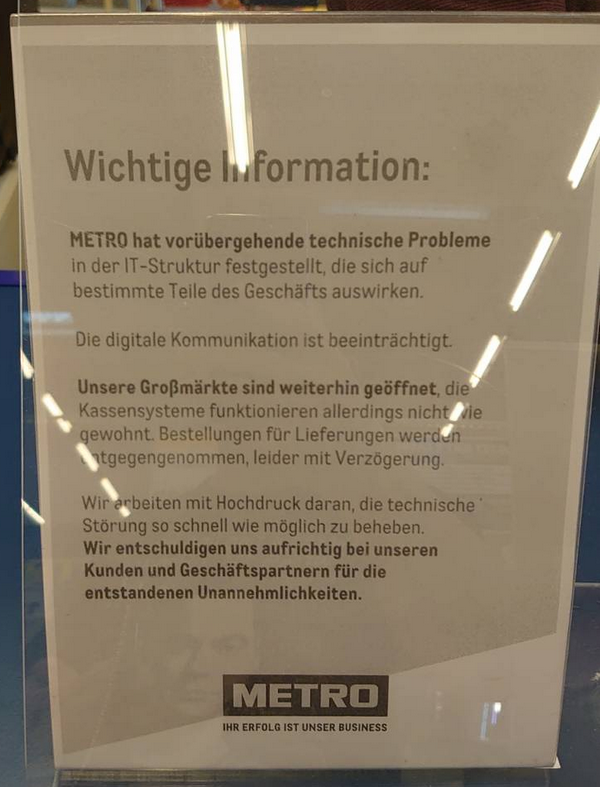 Notification about IT disruption at a Metro wholesale store

The suspicion of a cyber attack has not been confirmed by company spokespersons till today (October 21, 2022). But I have had reports from German blog readers, reporting IT issues since days and some people told me, it's a cyber attack as a root cause.

Not only Austria and France are affected, but Metro AG worldwide. In Germany, too, the same problem has existed since last Monday. No more stock or prices can be updated or checked in the store. The checkout system is still working but also sluggishly, resulting in long lines. If you want to reserve something digitally, that doesn't work either.

One reader noted that from what he observed, the IT problems have been going on since Friday afternoon (October 14, 2022). A reader informed me on Facebook that their email systems had delivered a 442 connection Failed-Error when communicating with the Metro mail system last Monday. By the afternoon of October 19, 2022, communication with the Metro Group email system was working again – so something is happening.

First a speaker from Metro AG confired to German IT magazine heise a cyber attack on it's IT systems. After searching the Metro AG site today, I finally found the following statement. It says (translated in English): 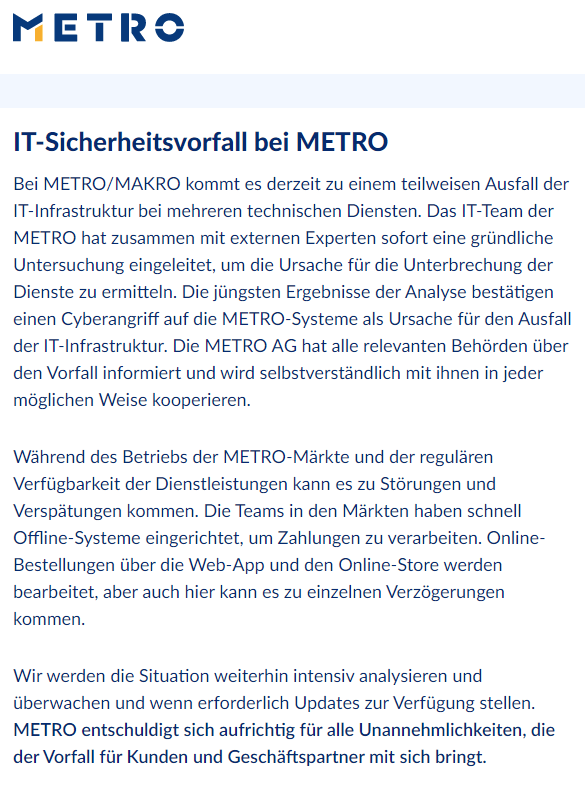 METRO/MAKRO is currently experiencing a partial IT infrastructure outage for several technical services. METRO's IT team, together with external experts, immediately launched a thorough investigation to determine the cause of the service disruption. The latest results of the analysis confirm a cyber attack on METRO systems as the cause of the IT infrastructure outage. METRO AG has informed all relevant authorities about the incident and will of course cooperate with them in every possible way.

During the operation of METRO stores and the regular availability of services, disruptions and delays may occur. The teams in the stores have quickly set up offline systems to process payments. Online orders via the web app and online store are being processed, but there may be individual delays here as well.

We will continue to analyze and monitor the situation intensively and provide updates if necessary.
METRO sincerely apologizes for any inconvenience this incident may cause to customers and business partners.

So they confirmed just a cyber attack, but stay tight lipped about the details. No information, whether it's a ransomware infection nor about a possible attack vector.

Metro AG is a listed group of wholesale companies (for purchases in the gastronomy sector). Headquartered in Düsseldorf, the group employs more than 95,000 people in 681 stores worldwide, most of them in Germany. In Germany, the company mainly operates the Metro wholesale stores. Sales are 24.8 billion euros (2020).