[German]As of October 17, 2022, Microsoft has released several unscheduled updates for Windows. These updates fix a connection problem that can occur with SSL and TLS connections. Affected by this problem are probably all Windows client and server. Below I have listed all available updates and also give some hints where problems occur without these updates.

Microsoft made a mistake with the last updates for Windows (preview updates from September, security updates from October). As a result, various problems with SSL and TLS connections can occur. Microsoft has therefore released some : out-of-band updates on October 17, 2022 to fix the problem.

I had reportedthat  in the blog post Out-of-band updates for Windows fixes SSL-/TLS connection issues (also with Citrix) – October 17, 2022. However, Microsoft had not linked all the updates in its status pages (thanks to EP for pointing out the links), so that I could complete the list of updates for the affected Windows versions below:

The out-of-band updates KB5020439 and KB5020440 were added on October 18th.  These updates are only available for download in the Microsoft Update Catalog and have to be installed manually (just search for the KB numbers). Details about these updates can be found in the linked KB articles.

So only Windows 11 22H2 is missing the corresponding fix update. EP writes here that this fix will be added with the upcoming update KB5018496. This is currently released in the Windows Insider program as a pre-release version in the Release Preview channel (see).

Problems fixed with the updates

People have asked in comments which applications are actually affected by the TLS bugs. I don't have a complete list, but would like to give some hints below as to what has come to my attention as a fix. Thanks to blog readers for the pointers.

With the October 2022 updates, administrators found that Citrix clients could no longer communicate with Citrix netscalers. I had reported on this in the blog postCitrix connections broken after Windows update KB5018410 (October 2022) (TLS problem). Affected people who installed the above updates reported that this fixed the connection problem.

On Windows, there was also the issue that there TLS 1.3 implementation was buggy on Windows 10 (it only works in Windows 11). I had raised a conflict case in the blog post Bug: Outlook no longer connects to the mail server (October 2022). Microsoft suggested disabling TLS 1.3 via registry intervention as a workaround. In this comment, someone suggests uninstalling updates KB5018410 (Windows 10) and KB5018427 (Windows 11).

Blog reader Harvester asked here, whether TLS 1.3 works with Windows 10 after installing the special updates, and then followed up with the results of his own tests.

We initially guessed that the IoT Enterprise SKU wasn't supporting TLS 1.3, but now we confirmed that we hit the bug mentioned in the post.

"Fun" fact : while it as initially reported that TLS 1.3 was available starting from Windows 10 1903, the Schannel documentation was changed recently, and now state that only Windows 11 and Server 2022 support TLS 1.3: Protocols in TLS/SSL (Schannel SSP)

Within this German comment blog reader Marten reported, that the WebEx Meetings App could no longer connect to the WebEx Server (OnPrem) via VPN. The issue has been fixed via update.

On Twitter, enno0815de has sent the following tweet, which refers to my message about the out-of-band updates with TLS fix. It says, anyone planning a domain migration using Quest Migration Manager for Exchange should also install the updates. Otherwise, the account will be locked out for the migration. 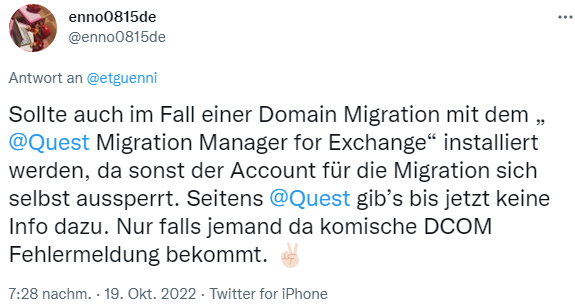 In a follow up tweet he adds: By some circumstance the Atelia class (Quest component) is deleted from the registry. Without the TLS fix, you lock the user out of AD completely.