[German]In Windows 10 the service CDPUserSvc has been introduced. This service is a kind of continuous trouble maker. This blog post deals with the question, what is CDPUserSvc for and discusses issues caused by November 2017 update.

I’ve had this topic since weeks on my agenda to blog about. Then I received this comment from Markus Damerau within my German blog. And I got a mail from Peter H. dealing with the same issue.

The service CDPUserSvc belongs to “Connected Devices Platform Service” (CDPSvc) and there are task with changing appendixes in the name (CDPUserSvc_701f6cb). The service has been introduced in Windows 10. 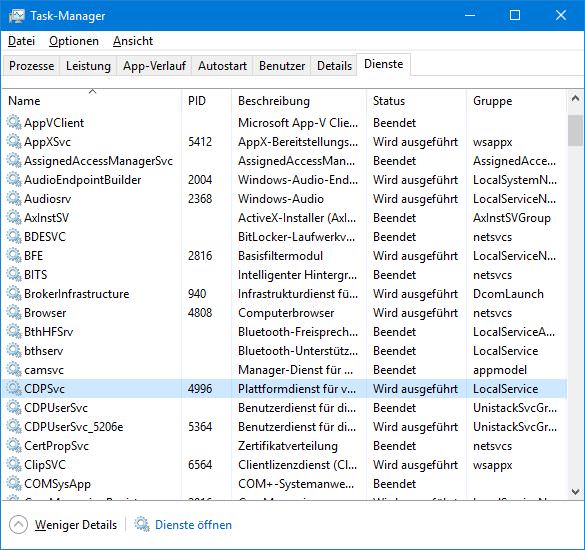 This article contains some details about the start modes of this service within distinct Windows 10 builds. Within this German forum post AReilland gives a few details about the tasks of this service – syncing (mails, live tiles, OneDrive etc.). At TechNet forum there is this thread with a few additional details. There I found the explanation, that CDPUserSvc is the abbreviation of “Microsoft (R) CDP User Components”, probably the UWP part of “Connected Devices Platform Service” (CDPSvc ). 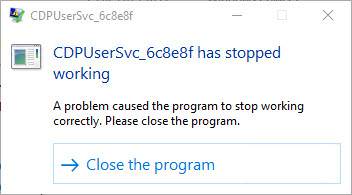 Within the German comment here, Markus Damerau wrote, that the  error CDPUserSvc has stopped working occurs after each restart of Windows 10 Enterprise LTSB. Peter H. told me within a mail:

Within the event log in event manager we found the following entries: 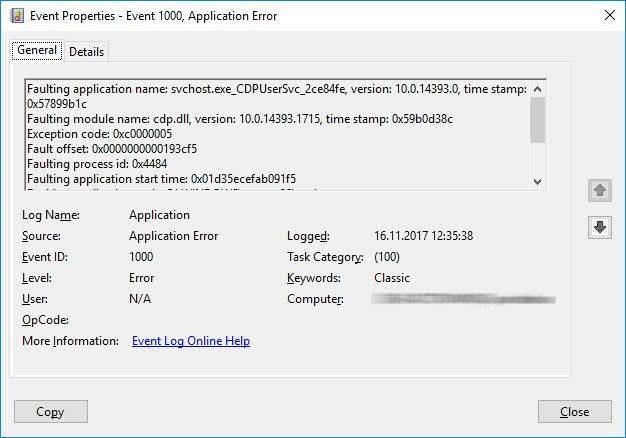 In event manager we see that that cpd.dll is causing an error 0xC0000005 (STATUS_ACCESS_VIOLATION). Peter wrote:

We have already noticed this behavior with the cumulative update KB4041688 (OS Build 14393.1794) and went therefore back to OS Build 14393.1770 (KB4041691). On the Internet, initial information from users with the same problem is now circulating. Current workaround: Uninstall KB4048953 – that helps. We’ll open a call to Microsoft in the morning. Let’s see what happens.

I fear the call won’t bring too much more details – but let’s not give up some hope. Searching the internet for CDPUserSvc and ‘stopped working’ reveals many hits, some from 2016 (see here and here). It seems, that the service is a trouble maker since months in Windows 10 and Windows Server 2016.

The value Start defines the start value of the service. The values are defined as:

If you set the value to 4, the service is disabled. However, Windows 10 seems to reset this value from time to time. In addition, a deactivated service causes certain functions to be missing in Windows 10. At German forum administrator.de, someone has even written a batch program in this forum post to deactivate the relevant services. Also Woody Leonhard mentioned at ComputerWorld a script that Glenn Turner has put together to disables the CDPSvc and CDPUserSvc services. It’s quite adventurous what you have to do as an administrator to keep your systems up and running.

A better approach: Isolate the process

Blog reader Markus Damerau mentioned within one of his comments posted in my German blog a workaround (I forgot this possibility). Just invoke an administrative command prompt window and enter the following command:

This command forces Windows to isolate the service in an own process (see). Process isolation is the default for services, but it seems that Microsoft decided, to run CDPuserSvc in another mode by default. Maybe process isolation solves the issue with the stopped service.

Blog reader Peter informed me about the result of a support call to Microsoft. Their feedback was:

Issue: error related CDPUserSvc_XX crashs after install KB4048952
Impact: medium
Scope: We are currently working to release an update to fix this issue. Fix to solve this issue will be inclueded on the second week of December update release.

This entry was posted in issue, Update, Windows and tagged issuses, Server 2016, Windows 10. Bookmark the permalink.