[German]It seems, Microsoft has fixed its Windows 10 activation problem, which has been affecting numerous Windows 10 users around the world. I’ve reported that incident yesterday.

Within my article Windows activation server currently down? (11/8/2018) I’ve reported several cases, where affected users contacted me. Also at reddit.com or on Twitter some users claimed a lost Windows 10 activation.

@Microsoft HEY! What the Hell is going on with Windows Activation?! I have in the last 30 min had my windows install tell me that it’s no longer activated and that my digital licence is invalid?! This better be some kind of Error! The App store is even broken!!! pic.twitter.com/nS2UiifXJX

German blog reader Fabian G. (thanks for that) sent me the following additional information:

just read your article and other articles about this problem and wanted to make sure what it looks like for me to downgrade from Pro to Home because I didn’t get a message. So I looked into the system and it said “Pro” (didn’t look at the activation). But when I closed the system window, I got the message: “Windows is not activated”. It’s funny how long an activation lasts – not at all. When calling “System” the status of the activation is tested – for whatever reason – but a system that has been activated for years is probably not activated as soon as the servers fail. So much for ” … the activation will be stored in the Microsoft account in order to …” That was a sentence with X … Digital Life … Digital Disaster …

Most of the time it was noticed that an installed Windows 10 Pro was suddenly downgraded to a Windows 10 Home – but the activation problem handling did not go through any more. Blog reader Fabian G. told me the following in a second mail:

there is probably another kind of “downgrading” … Windows 10 Pro is made into a Pro N for once. Looks to me somehow after a hack of the data base … there probably someone has donated chaos. Only to hope that Windows does not stop its service. 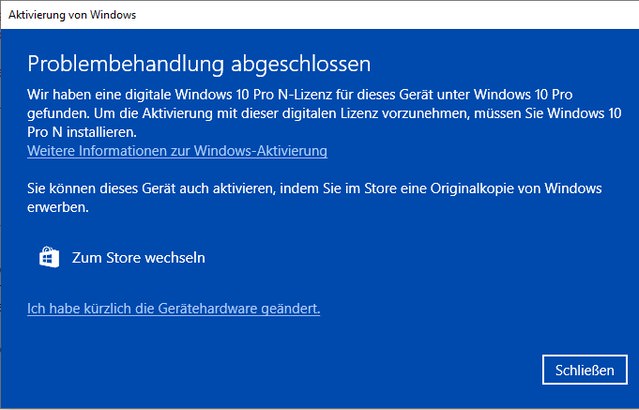 The above screenshot also indicates that the troubleshooting to solve the lost activation was not successful. Microsoft ‘recommends’ to buy an ‘original copy of Windows’ in the store – also a (costly) solution.

The error was confirmed by Microsoft

After the error was reported here in the blog and on numerous websites, Microsoft confirmed the error in the Answers forum.

Contacted Live Agent Chat, and here is the response given

Thank you for sharing, Daniel. Microsoft has just released an Emerging issue announcement about current activation issue related to Pro edition recently. This happens in Japan, Korea, American and many other countries. I am very sorry to inform you that there is a temporary issue with Microsoft’s activation server at the moment and some customers might experience this issue where Windows is displayed as not activated.

Our engineers are working tirelessly to resolve this issue and it is expected to be corrected within one to two business days, Daniel.

And a Microsoft employee PaulSey… (the forum owner) then pushed a more detailed explanation after:

We are aware of reports that some customers’ Windows 10 Pro and Windows 10 Enterprise machines are not recognizing their licenses as activated. Users may receive the following notification: “Error: you are running Windows 10 Pro, but you have valid digital license for Windows 10 Home,” or one of the following error codes 0X803F8001, 0xC004C003.

We are actively working to resolve this within 24 hours. You can still use your PC; however, the watermark will appear until activation is restored. Thank you for your patience.

We will update this post with additional information as needed and once activations are restored.

The announcement that it would take up to 24 hours to fix the whole thing points to a bigger problem. However, Windows 10 users can usually continue to work. The only stupid thing is when a Windows 10 Pro is downgraded to Home or the N version, because then some functions are lost.

The activation issue seems to be fixed

I now received some comments, that the activation error has been fixed since a few minutes – and the systems are activated again. Also the following tweet of a Windows 10 user confirms this.

Looks like Microsoft has fixed their Windows 10 Pro Activation Servers within the last 10 minutes! @TheRegister pic.twitter.com/Ynea20maPM

If the activation does not recover automatically, simply go to the settings page, then switch to Update & Security and select the Activation category. There you will find options to start the activation troubleshooter manually.