Microsoft has released on July 11, 2017 two botched updates KB4025252 and KB4025336 for Internet Explorer and Windows 8.1. Here’s what’s wrong with these updates. Addendum: It seems that an update revision fixed some install issues.

On July 11, 2017 Microsoft released another fix for Internet Explorer that shall fix the crashes during visiting complex web sites.

Microsoft has also released cumulative update KB4025252 for Internet Explorer. This update is helpful for admins installing security-only Rollup updates for Windows 7 SP1 or Windows 8.1 and the corresponding Server variants. But it seems that this patch is botched, many users are reporting issues (at least with WSUS).

… the Windows event manager says, the update is installed successful. 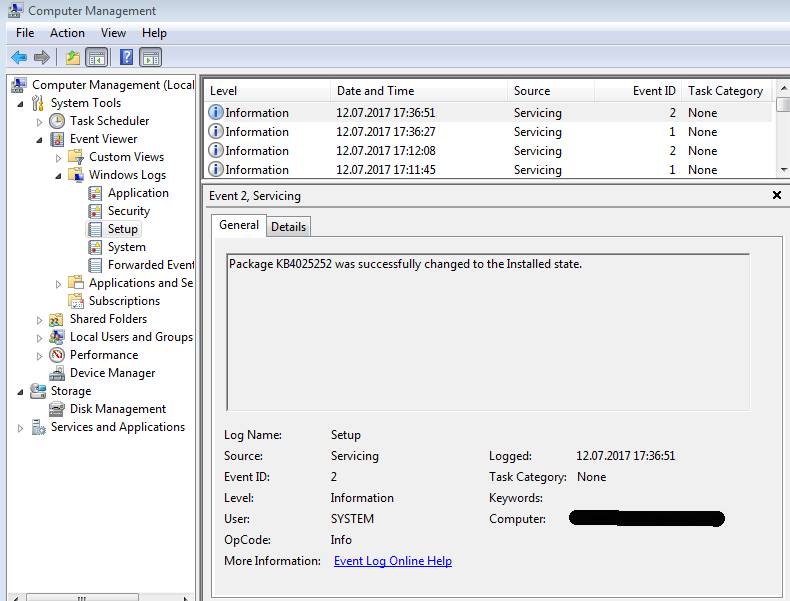 The only workaround: Hide or block this update in WSUS or SCCM and wait, until Microsoft delivers the next fix.

Some German blog readers mentioned Microsoft has released revision 210 of update KB4025252 on July 12, 2017 for WSUS and SCCM. Further comments posted within my German blog are saying, that multiple installs an clients via WSUS has been fixed.

But Microsoft hasn’t updated the KB article yet.

I also contacted blog reader Marco R., wo has send me the SCCM screenshots above. He wrote back that the revised update is offered on SCCM, bit there are still install errrors (see screenshot below).

Macro tries to verify it again, but till yet it seems that it hasn’t been fixed for SCCM.

Also in Technet forum this thread discussing the same issue. If you wondering about KB4022720 mentioned within this thread: It’s the Preview of the Monthly Rollups. In other words: Microsoft was aware about this issue since end of June 2017, but they decided to ship the botched update on July 11, 2017.