[German]It seems that the newly released Windows 10 Fall Creators Update (V1709) threatens us with bugs a hell. Even Explorer contains a bug that prevents renaming files or folders.

I couldn’t believe, as I read this German forum post, where a user claims that renaming of files and folders don’t work in Explorer. Here is a screenshot of my German Windows Explorer, where I set the View mode to small icons. 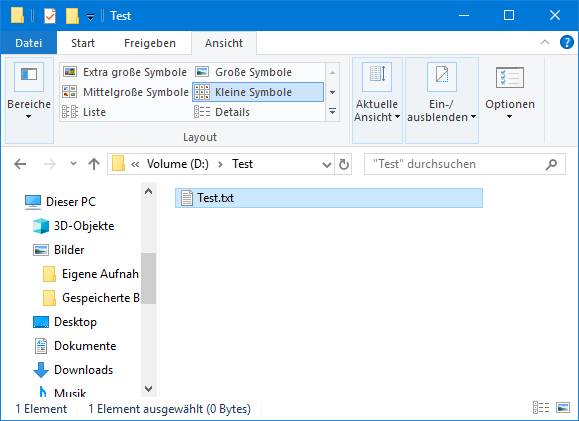 This mode completely disables the rename function in Windows Explorer. Pressing function key F2, which normally invokes a rename operation for the selected item, doesn’t show any reaction. Also the context menu command Rename and the Rename button within the ribbon won’t do the rename.

The only workaround is: Change the View mode to Details or an other mode and try the rename operation. I don’t know, if it’s only related to the German Windows 10 Fall Creators Update (V1709), or if it also affected other languages. But the bug is also in Windows 10 Insider Preview Build 17017 (Redstone 4).