Since some time I'm receiving firewall alerts, that the file remsh. exe wants to use the path C: \Program Files\rempl\ to establish a connection to an IP which, according to the IP address of the server query belongs to Microsoft Corporation, or more precisely to Microsoft Azure.

Browsing the Internet doesn't seems to help at a first glance. The first MS Answers forum entry I found, claimed (faulty) it was malware.

as mentioned above. And what the user cited above wrote, was, that he program tries to connect a Microsoft Azure server. So it seems, that the program is legit. But checking some test machines with Windows 10, I wasn't able to detect this file. This triggers 'worse fears' that it could be malware. 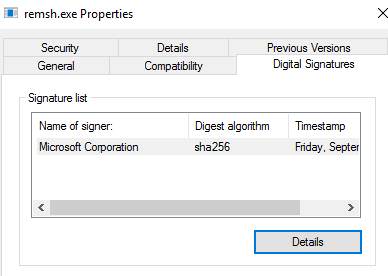 The best you can do in such a case: Right click the file, select Properties and check the Digital Signatures property page. Here I found a user, who has posted the screen shown above. The file has been digitally signed by Microsoft, so it's not malware.

The remaining question is: Why is REMSH.exe available only on some machine and is there an explanation, what the file is for? Searching the web for the file name brought me to Microsoft's KB article 4023057 that gives us some clue. At the time this blog post was written, KB4023057 stands for Update to Windows 10 Versions 1507, 1511, and 1607 for update reliability: November 2, 2017. Microsoft says:

The file version given in the table above may vary. But we have a firm explanation for our questions. First of all, the file may be found on 'certain builds of Windows 10 Versions 1507, 1511, and 1607 [that] require this update'. And it address issues that affect the update processes in Windows 10. Hope this has shed some light into this topic.