.NET Framework is a software framework from Microsoft, that allows to create applications. WPF stands for Windows Presentation Foundation, a graphical framework, introduced in Windows Vista.

WPF applications running under Windows 7 SP1 or Windows Server 2008 R2 SP1 stalls with an error, after update KB4055002 has been installed. There was a type initialization error in Windows Presentation Foundation (WPF) applications when the KB4055002 update was installed and the programs request a fallback font operation. I mentioned this in the article (Preview-)Updates for Windows, Defender, NET (January 2018). Here is an incomplete list of affected applications:

Another German blog reader informed me, that their CRM application didn’t work anymore under Windows 7 Pro x64, after installing this update. The reader pointed me to this Link at Microsoft, where the issue has been addressed.

This German Microsoft Technet forum entry discusses also an error in SQL developer forum. The user has been confronted with an error message:

After uninstalling Update KB4055002, the error was gone.

Searching the internet results in hits, where several software packages are affected. 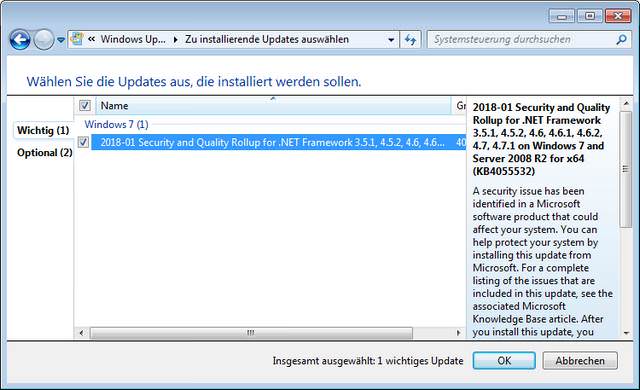 4074906 – “TypeInitializationException” or “FileFormatException” error in WPF applications that request fallback fonts after you install the January 9, 2018, .NET Security and Quality Rollup (KB4055002)

This entry was posted in issue, Windows and tagged issues, KB4055002, NET-Framwork, Update. Bookmark the permalink.