[German]Owners of Windows 10 run into the problem that the spotify app from Microsoft Store kills the system recovery of Windows 10. Here ate some information and details.

Users of the spotify app seem to be plagued by a problem with Windows 10, which is only noticeable when it is too late. System Restore does not work once the app is installed on Windows 10. 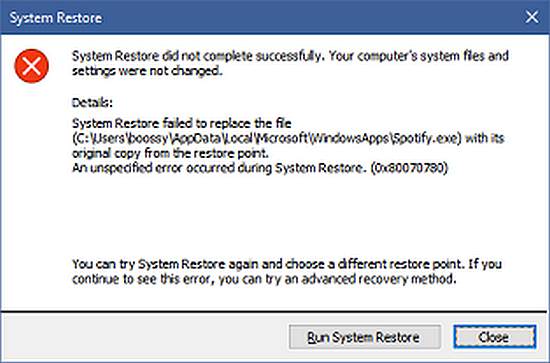 (C:\Users\XXXX\Appdata\Local\Microsoft\WindowsApps\Spotify.exe with its original copy from the restore point)

At Microsoft Answers there has been a longer thread since November 2017. In March, new users will be reported and earlier workarounds such as uninstalling the app will not help any more.

Something similar I had reported some time ago here in the blog, where it was an office app, which blocked system restore. (via)

This entry was posted in issue, Windows and tagged Security, system restore, Windows. Bookmark the permalink.