[German]Does the installation of (feature) updates fail under Windows 10 due to driver issues? In order to possibly solve Windows 10 upgrade/update issues, there is a trick: Exclude driver updates during installation. Here are some details about this approach.

German blog reader Tibor Simandi-Kallay did send me a mail with an observation he made during Windows 10 update install. So I decided to write a short blog post about that topic.

Many Windows 10 users are plagued by the fact that the installation of cumulative updates or feature updates (upgrades) simply fails. There are many reasons for this, which I mentioned here in various blog posts. Often drivers prevent successful installation of updates under Windows 10.

Blog reader Tibor Simandi-Kallay told me within his e-email an interesting observation:

I had update issues with the latest Creators Update 1709 from Microsoft on several computers. But the installation worked on my main computer. I was surprised about a registry entry, which Microsoft had secretly made on a machine. 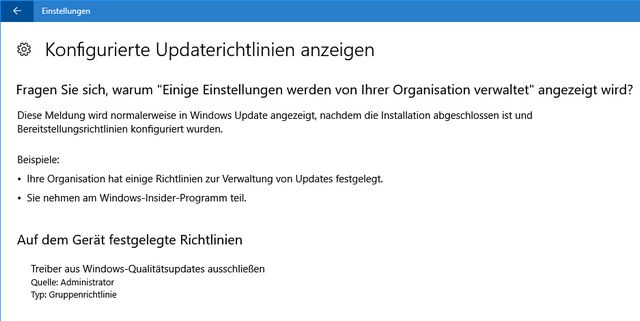 This key may keep a DWORD value:

This value deactivates the group policy, and Microsoft has published this document about this key, supported since Windows 10 Version 1607. Another discussion about this topic may be found at Ten forums and here.

Suddenly, the update can be installed

The above registry entry brought the user to the idea to try the following steps, to force the update installation:

1. Enter the DWORD value ExcludeWUDriversInQualityUpdate and set it to 1 to enable the policy.

2. Go to this Microsoft site, where you can download an install ISO image or the upgrade tool.

In his case, the blog reader told me, he was finally able to update his Windows 10 computers to the most recent build. Reason: Driver issues seem to have prevented the installation of the function updates. Due to the set policy, the update installer was forced to keep the most important drivers of the computer untouched. Perhaps this information may help one or two blog readers to find out more.

This entry was posted in Windows and tagged Tip, Windows 10. Bookmark the permalink.