[German]A brief Information for users of Windows 10 version 1803, who are surprised about error entries with EventID 33, caused by the spell checker. This seems to be a bug that Microsoft has not yet corrected (August 2018).

Windows 10 comes with an integrated spell checker. This can be switched on or off in the Settings app in the category Typing. The article here deals with disabling spell checking/auto correct.

On my German test system auto correct won’t work at first. During testing that within the Mail app, a note popped up, how to add another language pack. I went in Settings app to the installed language, select ‘German’ and then ‘Options’ for this language. Then I was able to download and install options language options. Afterward I was able to use spell checking. 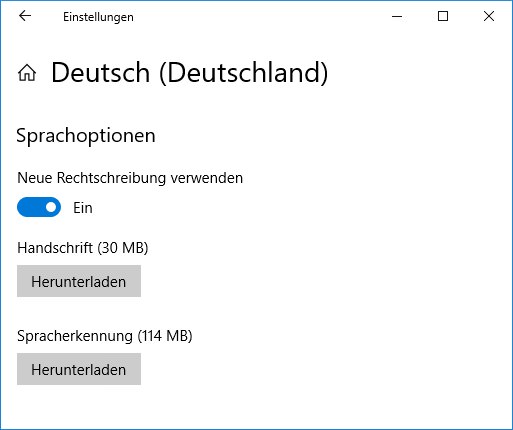 With the upgrade to Windows 10 April Update (version 1803) something seems to have gone wrong with auto correction/spell checker. German blog reader Tom (thanks for that) brought my attention to this issue. The bug is discussed in the Microsoft Answers Forum.

Everytime i dont type something quite correct :P it will give an eventviewer message that basicly says something like this :

The spellcheckerprogram remains available. (its originally in dutch)

I’ve already unchecked autocorrect and marking in the settings for typing etc.

But it still continues to mark stuff.. even now this whole page is practically underlined because im typing in English and not Dutch lol.

How to fix this or at the very least filter it from the eventviewer results?

In a nutshell: The user has a fresh installation of Windows 10 V1803 (in Dutch). Whenever he types a word under Windows 10 that has a typo, an error entry with the event ID 33 is added to the event log.

According to this forum post, however, this occurs with Edge, in Apps or in Word for instance. Other users who have only installed one language pack under Windows 10 but have the same event IDs in the Event Viewer have also reported in the thread. I was able to find the entry on my test system after I started the mail app and entered an incorrect text. The following screenshot shows the entry in the event display (German Windows 10). 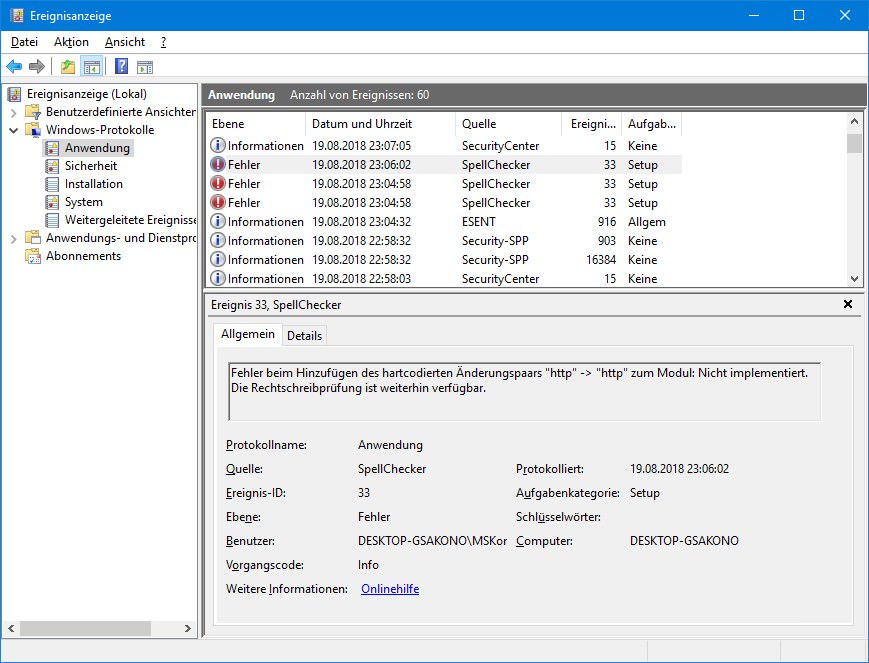 The following screenshot is from an English Windows 10 V1803 and was posted in Tens forum. 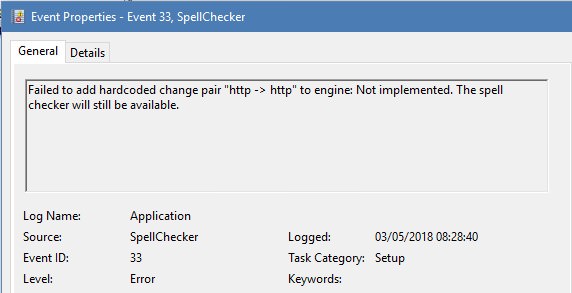 I interpret the details message, that a auto correction word pair in spell checker (http -> http) is not implemented. However, the spell checker module remains available.  The discussion in the Microsoft Answers forum still results from May 2018, where the feature update to Windows 10 version 1803 just has been released. Meanwhile, cumulative updates for June, July and August 2018 have been released. But as my test above shows, none of these cumulative updates fixed the bug in the integrated spell checker.

Addendum: I’ve tweeted it now to @jenmsft and wait, if it will be addressed soon.